A State of Innovation: Georgia Power

Georgia Power began as a small electric company in Atlanta, Georgia, in the 1880s and has since grown to serve the entire state of Georgia. Use the links below to learn more about the fascinating history of Georgia Power and explore print and television advertising.

Georgia Power Company, as it is known today, is the collection of several Georgia utilities companies. Those companies have played a pivotal role in the creation of a modern Georgia.

In 1883, citizens of Atlanta formed The Georgia Electric Light Company of Atlanta. Driven by a desire for lighted streets for the growing city, the citizen-owned company entered into a contract with Southern Light Company of New York. In 1884, the company built a plant in Atlanta to generate power for the city’s streetlights. By 1889, the plant generated enough power to light the city’s streets and the newest technologies of modern cities, streetcars.

In 1891, the company changed hands. Henry M. Atkinson, an Atlanta banker, gained controlling interest of The Georgia Electric Light Company of Atlanta. Atkinson shortened the company’s name to The Georgia Electric Light Company and set about acquiring new companies. Atkinson also focused on building new plants, such as Morgan Falls and the Davis Street plant. Over the next 50 years, Georgia Power continued to grow and acquire new companies.

In 1949, the last electric streetcar was retired and replaced with a trackless trolley. The power generated by Georgia Power Company was no longer needed for these forms of transportation. In 1957, Jack McDonough became the sixth President of Georgia Power and transferred the focus of the company from transportation to providing energy for the state.

Georgia Power was forced to cut construction efforts and appeal to small electric cooperatives during the financially troubled 1970s. The infusion of money from smaller utilities, like Oglethorpe Power Corporation, saved Georgia Power from bankruptcy.

Since then, Georgia Power Company has been involved in several notable projects. These include the introduction of several electric vans to their fleet of vehicles, something unusual for the early-1990s. Also, Georgia Power was named the “Official Power Source of the 1996 Olympic Games.” In 2006, Savannah Electric merged with Georgia Power, adding over 100,000 accounts. Georgia Power Company is also active in environmental research and initiatives for cleaner energy, including research for clean water, encouraging the use of solar energy and incentivizing the installation of EV-chargers in homes.

Georgia Power launches a new advertising campaign every year, with both television commercials and print advertisements. This year, 2015-2016, the promotions focus on energy efficiency. 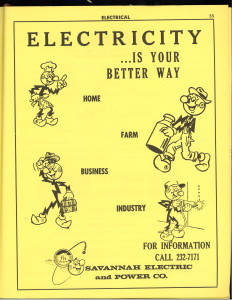 “Breezy,” GeorgiaPower.com Television Commercials, Energy Efficiency
Georgia Power educates customers about energy efficiency and the incentive programs the company has for its customers.