Home > About the Georgia Historical Society > Blog > Business History > A State of Innovation: The Coca-Cola Company

A State of Innovation: The Coca-Cola Company

On May 8, 1886, Dr. John Stith Pemberton sold the first glass of Coca-Cola. Originally developed as a health cure, Coca-Cola went on to become the most recognized brand in the world. For many, it symbolizes the growth of American business and international expansion. And, it all started here in Georgia. Use the links below to learn more about Coca-Cola’s history and explore advertisements created at different periods.

When Jacob’s Pharmacy in Atlanta, Georgia, first sold Coca-Cola for 5 cents a glass, it was not very popular. The pharmacy only sold about nine glasses a day of the soda. This lack of popularity changed dramatically by the turn of the century.

In 1888, just before his death, Dr. Pemberton sold the majority of the rights for Coca-Cola to a successful Atlanta businessman named Asa Candler. Coca-Cola sales exploded, and in 1893, the Coca-Cola Company was born. Mr. Candler believed in the importance of advertising, and made many efforts to make Coca-Cola a household name. Using words like “refreshing” to describe the product, a key part in today’s advertising of Coca-Cola, the new owner was very successful in increasing the drink’s popularity. In fact, in 1895, Mr. Candler claimed that people in every state and territory in the country drank Coca-Cola. What started as a small Georgia business quickly grew into a national brand.

Mr. Candler also made another decision important to the Georgia economy. Instead of opening plants all over the country like most companies did, the Coca-Cola Company voted to sell bottling rights to several small businesses all over the United States, including several in Georgia. Bottlers in Atlanta, Athens, Rome, and Savannah worked for the brand, helping to strengthen the Georgia economy.

The company was sold again in 1919, and the new owners renewed the commitment to strong advertisement of the brand. Robert Woodruff, the new president of the Coca-Cola Company, believed that bottling was the future of the company. Advertising efforts focused on making the idea of taking Coca-Cola home with you attractive. As a result, Coca-Cola created the six-pack carton to sell bottles of the soda and the metal cooler to sell the bottled drink cold. Coca-Cola started as a soda fountain drink available only in shops and restaurants, but by the 1920s, it was quickly becoming a drink to enjoy everywhere.

Mr. Woodruff made another important decision for Coca-Cola: he decided Coca-Cola should focus on becoming a global brand. Candler and his sons attempted to make the soda popular worldwide but met little success. Small orders for the syrup were placed from England, and bottling factories were established in places with a strong American influence like Cuba and Panama. In the 1920s, Woodruff started a relationship with the Olympic Games. Coca-Cola became a partner of the Olympics, and the soft drink was always sold wherever the games were held.

During World War II, Mr. Woodruff vowed to make Coca-Cola available to all U.S. military personnel. This decision led to the construction of more than sixty bottling plants in North Africa, Europe, and the Pacific. Providing Coca-Cola to overseas troops not only brought a little taste of home to soldiers, but it also made the drink a recognizable product for the local populations in these areas. The Georgia company was about to go global.

The world was a different place at the end of WWII. Countries like East and West Germany, Israel, and various others throughout Africa were created, producing new markets for Coca-Cola. The company also changed dramatically in the postwar years, creating new sodas–for example Sprite and TAB–and merging with other beverage companies such as Minute Maid. To mark these changes and to keep up with new technologies, advertising campaigns also changed. Radio jingles and television commercials, along with traditional print advertisements, encouraged people all over the world to try Coca-Cola—and millions did.

Today, Coca-Cola is available in more than 200 countries and offers more then 400 products, including the original Coca-Cola first served in Jacob’s Pharmacy. 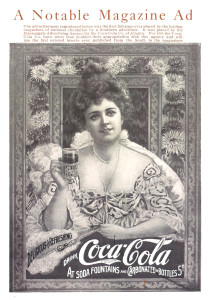 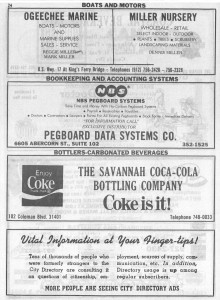 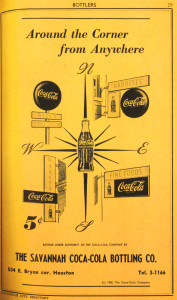 One of the most famous and successful advertising campaigns for Coca-Cola was the 1971 “I’d like to buy the world a Coke” campaign, which was part of the “It’s the Real Thing” marketing campaign. The “Hilltop” commercial was popular among Americans.