Home > About the Georgia Historical Society > Board of Curators > John F. McMullan 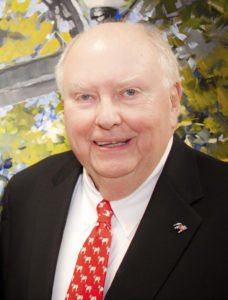 John Francis McMullan earned Bachelor’s and Master’s degrees in accounting from the University of Georgia in 1958 and 1960, respectively. Following graduation, he worked as a senior accountant at Price Waterhouse & Company and then taught tax and accounting theory for a time, both at Georgia State University and University of South Florida. In 1970 he founded McMullan & Company, an accounting firm that he eventually sold to his partners in 1986. He is currently president of Camden Real Estate Company, but continues to practice accounting on a limited basis and maintains professional affiliations in the American Institute of CPAs, the Georgia Society of CPAs and the National Conference of CPA Practitioners, of which he is a founding member and former chairman. He also serves on the board of Life Care Centers of America, a $2 billion a year health care facilities company for which he has been a financial consultant since the mid-1970s. He is past president and current treasurer for the Touchdown Club of Atlanta.

A loyal “Dawg,” John makes the trek to Athens several times a year, both as a football fan and as an active trustee for UGA’s Arch Foundation. He is also a former emeritus trustee of the University of Georgia Foundation, and his wife, Marilyn, serves on the board for the Georgia Museum of Art. John’s business partner and son, Ted McMullan, graduated from and serves on the Alumni Board of UGA’s flagship business school, the Terry College of Business.

John has a keen interest in genealogy and has traced his family’s roots in America as far back as the 1760s. The McMullans came from Virginia to Georgia and settled in Hart County in the 1790s. John was born in Covington and moved to Athens at age 5. His father, Thomas Leverette McMullan, was a UGA Extension Service district and county agent. John’s parents, “Mac” and Pauline Little (“Polly”) McMullan, were great friends of Georgia agriculture pioneers J.W. and Cora Lee Fanning.

Having lived and worked in Georgia for most of his 74 years, John has watched the changing local landscape with interest and has been an avid reader of its history. His interest in history has coincided with his interest in real estate, and John’s many side ventures over the years might read like a unique chronicle of the South: they include ownership in warehouses, coastal properties, a Waffle House, large tracts of land in Georgia and Florida, and, most recently, the Tiger Mountain Vineyards in Tiger, Georgia.