Home > About the Georgia Historical Society > Board of Curators > Kessel D. Stelling, Jr. 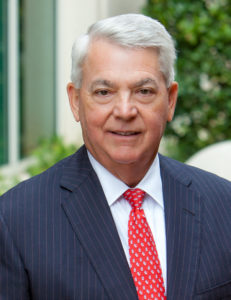 Kessel Stelling was named President and Chief Executive Officer of Synovus in October 2010 and elected Chairman of the Board in January 2012. Under his leadership, the company has been named one of American Banker’s most reputable banks for four consecutive years, including 2017, when it ranked number one.

Stelling was appointed to the Board of Regents of the University System of Georgia in February 2008 and was Chairman of the Board in 2016. He serves on the Board of Directors of the REACH Georgia Foundation, which oversees awareness, engagement, fundraising, and investment for the State of Georgia’s first needs-based mentorship and college scholarship program.

Stelling is married to Carol and has two sons and four grandchildren. He resides in Atlanta.