Home > About the Georgia Historical Society > Board of Curators > Robert S. Jepson, Jr. 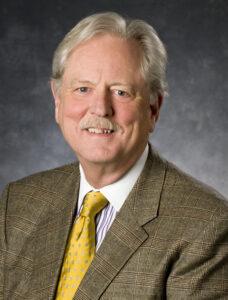 Robert S. Jepson, Jr. is Chairman and CEO of Jepson Associates, Inc., a private investment firm headquartered in Savannah. Mr. Jepson and his wife, Alice Andrews Jepson, focus much of their philanthropy on higher education. The Georgia Historical Society’s Jepson House Education Center, the institution’s administration and education building, recognizes the Jepsons’ role as principal benefactors of the facility. Their support also made possible the renovation and expansion of the GHS Research Center. Among their most notable contributions is the University of Richmond Jepson School of Leadership Studies, founded in 1992. The school is the only one of its kind in American academia. Mr. Jepson earned two degrees from the University of Richmond: a Bachelor’s in 1964 and an M.S. in Commerce in 1975, and the University awarded him an honorary doctorate in 1987. Additionally, Mr. Jepson holds ten other honorary doctorates from ten separate American institutions of higher education. Recently, Mr. Jepson established the Jepson Scholars Foundation at the University of Richmond, a program that advances global leadership by providing graduating seniors with a one-year master’s degree from the University of Oxford in England. He previously served on the boards of the Georgia Ports Authority and Dominion Resources, and currently serves as an honorary Trustee of the Telfair Museums and as former Chairman of the Board of Visitors of the Savannah College of Art and Design. He has been recognized by Georgia Trend Magazine as among the 100 Most Influential Georgians.