Home > About the Georgia Historical Society > Board of Curators > Sam Nunn 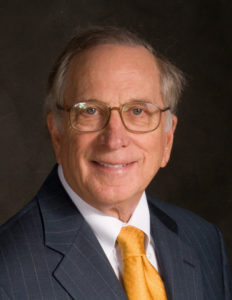 Sam Nunn is co-chairman and chief executive officer of the Nuclear Threat Initiative (NTI), a charitable organization working to reduce the global threats from nuclear, biological and chemical weapons. He served as a United States Senator from Georgia for 24 years (1972-1996) and is retired from the law firm of King & Spalding.

Raised in the small town of Perry in middle Georgia, he attended Georgia Tech, Emory University and Emory Law School, where he graduated with honors in 1962. After active duty service in the U.S. Coast Guard, he served six years in the U.S. Coast Guard Reserve. He first entered politics as a member of the Georgia House of Representatives in 1968.

During his tenure in the U.S. Senate, Senator Nunn served as chairman of the Senate Armed Services Committee and the Permanent Subcommittee on Investigations. He also served on the Intelligence and Small Business Committees. His legislative achievements include the landmark Department of Defense Reorganization Act, drafted with the late Senator Barry Goldwater, and the “Nunn-Lugar” Cooperative Threat Reduction Program, which provides assistance to Russia and the former Soviet republics for securing and destroying their excess nuclear, biological, and chemical weapons.

In addition to his work with NTI, Senator Nunn has continued his service in the public policy arena as a distinguished professor in the Sam Nunn School of International Affairs at Georgia Tech and as chairman of the board of the Center for Strategic and International Studies in Washington, D.C.

He is a board member of the following publicly-held corporations: Chevron Corporation, The Coca-Cola Company, Dell Inc., and General Electric Company. He is also a 2011 Georgia Trustee.

He is married to the former Colleen O’Brien and has two children, Michelle and Brian, and two grandchildren.