Home > About the Georgia Historical Society > Office of the President > Perspectives: The President’s Column > The Right Leaders for the Job

There’s an old saying that an organization is only as good as the people who lead it. That’s why the Georgia Historical Society has been so successful. Over the last twenty years we have been blessed with amazing board leadership-the right people at the right time to get the job done.

In the fall of 1994 when I was hired with the original title of executive director, GHS was led by Howard Morrison, who served as president until 1995. Through his charisma and vision, Howard convinced the Board of Curators that GHS could rise above its then-current status as a sleepy Savannah institution and become truly statewide in mission, scope, and presence. The enthusiasm he generated set the stage for the incredible growth of the past two decades. 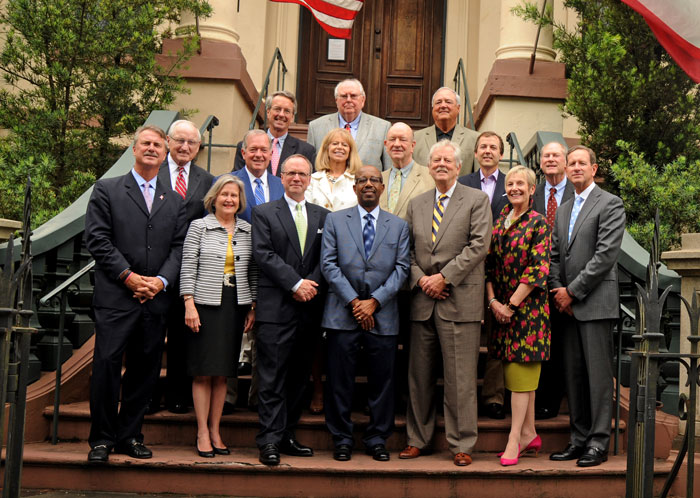 A significant aspect of that growth, one that laid the path to the future, was regaining management over the most important elements of the Society’s mission—the Research Center (then known as the Library and Archives). As president, Lisa White (1995-1999) and Laurie Abbot (2001-2002) possessed the courage, resolve, and knowledge of state government that it took to privatize the library and then add the Historical Marker Program to the list of services GHS performs for the people of Georgia.

Kay Hightower (1999-2001), Gracie Phillips (2002-2004), and Robert Brown (2012-2014) opened Atlanta’s doors, diversified our membership and donor base, won new friends for GHS, and helped forge relationships that would become crucial to our future, including those with organizations like Georgia Public Broadcasting and individuals like Herman Russell, Tom Cousins, and Andrew Young.

As the first chairman of the board, a new position created with the bylaws revision of 2006, Don Kole (2006-2008) rallied the board around the need for additional administrative and programmatic office space that would allow significant growth and expansion as GHS continued its statewide outreach. Bill Jones III (2008-2012) then revolutionized the board by bringing in extraordinary new leaders with powerful connections and influence, making possible a successful $7 million capacity building campaign that has taken GHS to the next level.

Once again GHS has the right person at the right time for the job ahead. Bob Jepson, as a highly successful entrepreneur and experienced fundraiser, brings the right combination of skills, experience, and influence to the position of chairman. He has already been a transformational figure in the history of GHS. The Jepson House Education Center, of which he and his wife Alice are the principal benefactors, is the first expansion of our campus in forty years. The Jepson House exemplifies the broad vision and unbounded generosity that make Bob an ideal board chairman as we charge forward with new programs like our Business History Initiative and a $12 million endowment campaign. Victory follows wherever he puts his time and effort, and we are fortunate indeed to have his guidance and involvement.

The men and women who have served as president and chairman of GHS over the past twenty years are among the finest our state has to offer, and they have taught me a great deal about the importance of community service and the power of effective leadership. GHS is now a national leader in the field of public history because of them. We are immensely grateful for all they have done and continue to do.