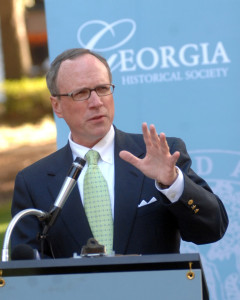 One of the leading public history executives in the nation, W. Todd Groce has over 30 years of experience as an educator and administrator and has led institutions in raising over $100 million for educational programming, capital projects, and endowment.

In 1990 Dr. Groce left the academy and began his career in public history. He served five years as executive director of the East Tennessee Historical Society, taking that institution to the next level through the development of a new regional history museum. In November 1994 Dr. Groce was named executive director of the Georgia Historical Society, and in April 2006 he was elected the institution’s 43rd president.

Dr. Groce understands the power that history has to transform the future and the special role the Georgia Historical Society plays in the process. “The essence of what it means to be an American can be found in our history,” he says, “When we understand the story of our unique democratic institutions and traditions, how they were created and the sacrifices that have been made to expand our liberties, we understand America. That’s why it’s crucial that we teach our state’s and nation’s history. The survival of the republic depends upon it.”

“At this critical moment in our county’s development, it is also important that we take an honest, unblinking look at the past,” he adds. “History isn’t just about telling stories that make us feel good. It’s about understanding what happened and why, the successes and the failures, based on the documentary evidence available to us. We have to be willing to see the past as it was and accept it on its own terms, even if that contradicts what we’ve always believed.”

That philosophy forms the foundation of the Georgia Historical Society’s educational mission. It has also fueled unprecedented growth. During Dr. Groce’s tenure the institution’s annual revenue has increased from $500,000 to over $5 million, its endowment has grown from $1 million to nearly $20 million, and net assets have grown from $2 million to $32 million.

“The Georgia Historical Society stands in a special position between the academic community and the public,” says Groce. “There’s an amazing body of scholarship being produced in colleges and universities around the country but most of it is not reaching the public. That’s where GHS comes in. We’re the bridge between the academy and the public, connecting the scholarship with a wider audience, and increasing access to history.”

Building that bridge has positioned the Georgia Historical Society as the preeminent source for Georgia history. Since 1995 the Society has developed over a dozen new public educational programs, including major initiatives such as the radio/television/internet program “Today in Georgia History” (a collaborative project with Georgia Public Broadcasting); the Civil War 150 Historical Marker Project; the Georgia Civil Rights Trail; the Georgia History Festival; and, in partnership with the Office of the Governor, the Georgia Trustees, the highest honor the state of Georgia can confer.

In 1997 Dr. Groce led GHS through a voluntary privatization of its previously state-operated library and archives, creating unprecedented access to the oldest collection of Georgia history in the nation. This set the stage for acquisition of the papers of the state’s leading citizens, including U.S. Attorney General Griffin Bell; legendary UGA head football coach Vince Dooley; the first African American state supreme court chief justice in the nation Leah Ward Sears; and business luminaries such as Mills B. Lane, Jr., James Blanchard, Bill Jones III, Ray Anderson, and Bernie Marcus. It has also doubled the size of its campus through the acquisition of Jepson House Education Center, the institution’s administrative building, and completed a renovation and expansion of its Research Center, giving the institution 4 linear miles of archival storage capacity.

Over the past few years, the Georgia Historical Society has been recognized with two Emmy Awards; four Leadership in History Awards from the American Association for State and Local History; a Governor’s Award in the Humanities; the Tourism Partner of the Year Award from the Georgia Department of Economic Development; and resolutions passed by the United States Senate and the Georgia General Assembly. Since 2003 GHS has received from the National Endowment for the Humanities $8 million in direct and matching funds for various educational projects.

To achieve these successes Dr. Groce has assembled a remarkably talented and energetic team of the finest historians, archivists, and administrators from around the country. Nearly all of the professional staff has terminal degrees in their fields, including three with doctorates in history. Four of the institution’s seven senior leadership positions are held by women, including the chief operating officer. In addition, during Dr. Groce’s tenure GHS hired the first female editor and then the first African-American editor of its scholarly journal the Georgia Historical Quarterly.

In addition to being a leader in the field of public history, Dr. Groce is a published scholar and authority on the Civil War and U.S. military history. His first book, Mountain Rebels: East Tennessee Confederates and the Civil War, was based on his doctoral dissertation and published by the University of Tennessee Press in 1999. In 2005 he co-edited with Stephen V. Ash Nineteenth Century America: Essays in Honor of Paul H. Bergeron, also published by UT Press. He has written over 100 articles, essays and book reviews for publications ranging from the New York Times to the Journal of Southern History. Dr. Groce lectures to a wide variety of audiences, including college students, university faculty, K-12 teachers, and the general public. He has made television appearances on the BBC, the Discovery Channel, C-SPAN, the History Channel, Georgia Public Television, and various internet classroom productions.

Community service is also a significant part of his life. He is a 2003 graduate of Leadership Georgia, a past president of the Rotary Club of Savannah, and past Governor of the Society of Colonial Wars in the State of Georgia. He has been appointed to several government commissions by Georgia Governors Roy Barnes and Sonny Perdue, and was appointed by Governor Brian Kemp to the state board for licensing librarians. He is a former trustee of Savannah Country Day School, a past member of the Zell Miller Foundation Advisory Board, and has served as a vestryman and Sunday school teacher in the Episcopal Church.

Dr. Groce lives in Savannah with his wife and daughter and journeys to the mountains when his duties allow. He is an avid outdoorsman who enjoys hunting and hiking, a collector of military antiques, and a classically-trained musician who indulges his passion for Bach, Mozart—and Bluegrass.

“The Georgia Historical Society is an ancient institution that is just now hitting its stride,” he says. “As the oldest continuously operated historical society in the South we’ve been a leading force in how history has been interpreted for nearly 200 years. I’m excited about the increasingly important role we’re playing on both the state and national level to promote a better understanding of the past and create a better future.”