For many people, the Georgia historical Society’s Research Center isn’t just part of the GHS headquarters in Savannah—for them it is the Georgia Historical Society. Even though GHS is a statewide institution, and a nationally recognized leader among public history organizations, the GHS Research Center remains for many the heart of the Society, a revered and beloved landmark on the southwest corner of Whitaker and Gaston streets, across from Forsyth Park.

For nearly a century and a half, this architectural jewel in Savannah’s Historic Landmark District has housed one of the most unique and oldest collections of Georgia history in the nation. Comprised of historic Hodgson Hall (1876) and the attached Abrahams Archival Annex (1970), along with the new archival wing that dramatically expands storage capacity, each edition of the Research Center has been erected during a period of great change in our state and nation. Despite the ever-evolving political, economic, cultural, and social landscapes in Georgia, the Research Center has remained a foundational place for those who wish to better understand our state’s fascinating history.

As Georgia has changed over time, so has the GHS collecting mission. The GHS Research Center represents a steadiness and continuity when it comes to exploring our state’s past. In order to reflect Georgia’s historical evolution, the GHS collecting mission has broadened and expanded to better preserve the perspectives of Georgia’s changing populations, which helps us maintain an organic understanding of who we are as Georgians today.

In addition to continuing to collect the traditional materials of history, the GHS collecting mission has expanded to reflect the diversity of Georgia’s changing population. These perspectives are vital to gaining a better and more full understanding of the lived experiences of all Georgians throughout our history. As our perspectives on the past change, the GHS Collections housed in the Research Center grow to reflect those changes as well.

And that collection is impressive: The GHS Research Center preserves an unparalleled collection of Georgia and American history, the oldest in the nation, including more than 5 million manuscripts, 100,000 photographs, 30,000 architectural drawings, over 20,000 rare and non-rare books, and thousands of maps, portraits, and artifacts, representing the sweep of Georgia history from the founding to the present.

Among the nationally significant materials is an original draft copy of the United States Constitution, one of only 12 in existence; correspondence from Governors, U.S. Supreme Court Justices, and U.S. Presidents from Thomas Jefferson to Bill Clinton; the records of the Council of Safety that governed Georgia during the Revolutionary War; important documents related to the Cherokee and Creek Indians, including the papers of federal Indian agent Benjamin Hawkins, a Cherokee syllabary and newspapers, and records kept by federal commissioners during Cherokee Removal; documents on African-American history, such as slave records, Gullah-Geechee photographs, music, and oral histories, a growing collection of Civil Rights Movement records such as those of Rome NAACP president Ethel Hyer; the collection of Girl Scout founder Juliette Gordon Low; the World War II-era collection of journalist Lois Dozier Norvell; the papers of U.S. Attorneys General John Macpherson Berrien and Griffin Bell; and the collection of environmental activist and sustainability pioneer Ray C. Anderson, as well as the papers of early environmentalist and suffragist Helen Dortch Longstreet.

In the Vince Dooley Collection, you can see every letter that Coach Dooley wrote and received during his long coaching career at UGA, along with his busy calendars that track recruiting visits, like the one in January 1980 to Wrightsville to visit a high school senior named Herschel Walker.

The periodical collection dates from the 18th and 19th centuries, and the visual material collection includes an impressive variety of photographs and other images including portraits of many of Georgia’s most prominent leaders.

Hodgson Hall itself is a treasure of the Georgia Historical Society’s collection, a true architectural masterpiece.  One of the oldest library buildings in the United States, Hodgson Hall was designed and built in 1876 as a library and headquarters for GHS by American Institute of Architects founder Detlef Lienau and is listed on the National Register of Historic Places. 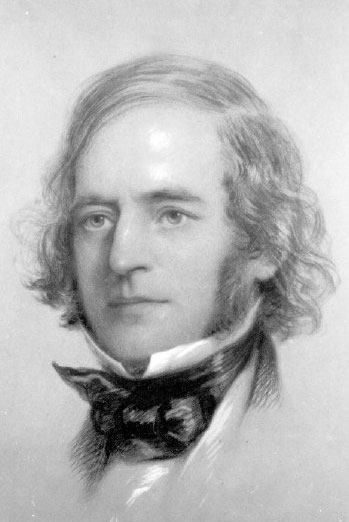 The building was a gift of Margaret Telfair Hodgson and Mary Telfair as a memorial to William B. Hodgson, Margaret’s husband and a prominent Savannah citizen, American diplomat, and scholar of Middle Eastern studies, who died in 1871.

In 2019, the Research Center opened a new chapter with the beginning of a large-scale renovation and expansion project. Completed in the fall of 2021, the project included a new archival wing as well as renovated and reconfigured spaces for archival processing, digitization, and specialized storage. The renovation also included updates to security, ventilation, and fire suppression systems, as well as updates to the Reading Room to improve both the form and function of that storied space.

The reaction for those who climb the 15 steep exterior steps and walk through the Research Center’s massive mahogany front doors for the first time is almost universally the same: an audible gasp. The interior is one of the most unique and beautiful library buildings in the American South. Its graceful arches and high vaulted ceiling are evocative of the Boston Athenaeum and the Trinity College library in Dublin, Ireland.

The main floor of Hodgson Hall, reaching 36 feet with its three-story-high ceilings and two balconies, houses the GHS library. The striking feature of this room in particular is its vaulted arched windows that were designed to provide maximum light and ventilation in the days when there was little artificial light and no air conditioning. In the days before air conditioning, the windows located on the third story were essential to relieving the oppressive summer heat and provided maximum daylight for the reading room in the main hall.

As you glance down the length of the room you will see the recently restored portrait of the building’s namesake, William B. Hodgson, by Carl Ludwig Brandt, located at the end of the hall. It’s been there since 1876 and is enclosed in a mantle of carved wood and Georgian marble.

The interior doors to the Reading Room still operate on their original decorative, brass hinges. The bronze railings along the mezzanine and staircases are also original to the building, as are the gas-turned-electric lights along the mezzanine. The four large tables in the reading room, made of slabs of solid walnut supported by cast iron bases, date to the opening in 1876. The outside entrance is a broad brownstone stairway with heavy curving metal balustrades leading to a two-columned portico. The property is surrounded on two sides by an ornamental iron fence with gates. 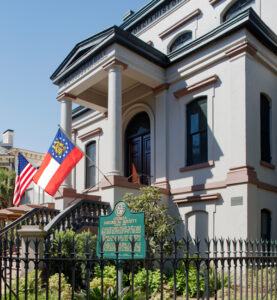 Hodgson Hall was memorably dedicated on Valentines Day, 1876, and has been, from that day to this, a place where people come from all over the globe to research history and from which all of GHS’s educational programs, publications, and resources for teachers and students emanate.

On any given day during that long stretch of 145 years, one could walk into the Reading Room and see historians, authors, genealogists, students, attorneys, filmmakers, architects, poets, artists, and perhaps actors researching something that interested them and that would find its way into their work. 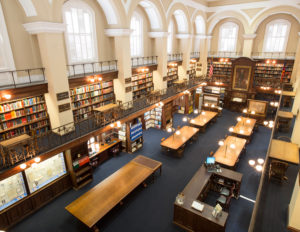 The questions asked of the materials varies with each person and each historical era but the result—knowledge that is created and disseminated to a wide and vast audience—has remained a constant since Hodgson Hall’s dedication in 1876 and is at the core of the Society’s mission that dates to its founding in 1839.

The Research Center is a literal, physical legacy of those who created GHS and all those who have followed, who believe in its ongoing mission to make the materials of the past accessible to those who study history and who strive to make it relevant in an ever-changing world.

As it has since 1876, the newly renovated and restored GHS Research Center will continue to be a beacon and a destination for all those who seek a greater understanding of our shared past.