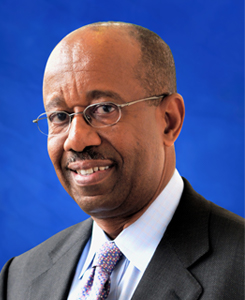 Robert L. Brown, Jr. FAIA has compiled an exemplary record of public service during his career, impacting how the entire profession of architecture is practiced in Georgia. Mr. Brown earned his architecture degree from Tuskegee University and established his firm R L Brown & Associates in 1984.

His role as a true Citizen Architect includes leadership positions with the Georgia Chamber of Commerce, Metro Atlanta Chamber of Commerce, Georgia Partnership for Excellence in Education, Citizens Trust Bank and Agnes Scott College. He is Chairman Emeritus of the Board of Curators of the Georgia Historical Society. But perhaps his most significant contribution has been in setting the direction of the Georgia Department of Transportation, serving as its Chair in 2016-17 and on the Board for more than a decade.

Highlights of his design portfolio include iconic work on the campuses of Morehouse College and Tuskegee University as well as Birmingham Civil Rights Institute. Mr. Brown was elevated to the AIA College of Fellows in 1999. He is also widely respected for a commitment to mentoring upcoming generations of architects, with many of them now in important leadership roles in the profession in Georgia.

For these reasons – a commitment to civic leadership, education, and mentorship, he received the 2017 AIA Georgia Bernard B. Rothschild award, the highest honor the American Institute of Architects (AIA) Georgia can give to an architect.