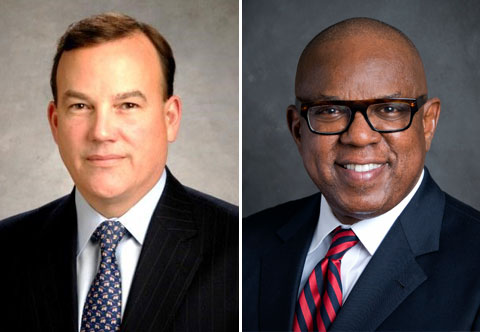 Atlanta, GA., November 4, 2015 –  The Georgia Historical Society has announced that Clyde Tuggle, Senior Vice President and Chief Public Affairs and Communications Officer for the Coca-Cola Company, and H. Jerome Russell, President of H. J. Russell & Company, have been elected to the Georgia Historical Society Board of Curators. The announcement was made following the Board’s fall meeting in Atlanta.

“Clyde Tuggle and Jerome Russell are two of Georgia’s top corporate leaders,” said Dr. W. Todd Groce, President and CEO of the Georgia Historical Society. “Their dynamic vision extends beyond their own companies and embraces the many non-profits they support with their time and resources. The Georgia Historical Society is extremely fortunate and excited to have their involvement on the board level. They add luster to an already illustrious group and further strengthen one of the strongest boards in the state.”

Clyde C. Tuggle is Senior Vice President, Chief Public Affairs and Communications Officer, for The Coca-Cola Company. He holds a bachelor’s degree in German Studies and Economics from Hamilton College and a Master of Divinity from Yale University. He studied at the Ludwig-Maximillian Universität in Munich, Germany, and completed The Executive Program at the University of Virginia’s Darden Business School. He is the Chairman of the Board of Trustees of Agnes Scott College and a trustee of the Georgia Research Alliance. He serves on the Boards of Directors of the Center for Addiction and Substance Abuse, the US-Russia Business Council and the World Affairs Council of Atlanta. He is a member of the Council on Foreign Relations, the Goizueta Business School Advisory Board and the Yale University International Advisory Board. In 2013, Mr. Tuggle was elected a Woodrow Wilson Visiting Fellow.

H. Jerome Russell moved through the professional ranks of H. J. Russell & Company’s construction & real estate development operations to his current position as President of H. J. Russell & Company and Russell New Urban Development, LLC, where his focus is on the firm’s strategic direction and new business development. He has been involved in the beverage distribution, consumer marketing, banking, construction and development business for over 25 years. Like his father, Herman J. Russell, Jerome has an entrepreneurial flair, a firmly placed future orientation, and a dedication to his community. In 1997, Jerome was named to the Board of Citizens Trust Bank and in 2005 was named Chairman of the Loan Committee at Citizens Trust Bank. He also serves on the board of H. J. Russell & Company, Concessions International, Metro Atlanta YMCA, American Kidney Fund, and Central Atlanta Progress. He is a member of the Urban Land Institute, Atlanta Rotary, Atlanta Chamber of Commerce, the Young President Organization and the 100 Black Men of Atlanta.