In October 1929, a massive stock market crash sent the country into the Great Depression, a period of exceedingly high unemployment rates and widespread poverty. Newly inaugurated President Franklin Delano Roosevelt enacted a series of programs to help the country get back on track. These programs, collectively known as the New Deal, created jobs and provided economic relief for people across the country. One of the programs was the Works Progress Administration (WPA), an initiative that created jobs in the public sector for the nation’s unemployed. 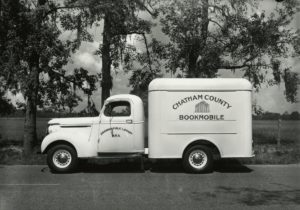 The WPA’s many library projects enabled librarians who lost their jobs at the onset of the Great Depression to earn a wage once again. The WPA Library Extension programs funded the construction of hundreds of new library buildings and developed traveling libraries such as the bookmobile in this photograph from 1940.

Librarians began using bookmobiles starting in the early 1900s. Traveling libraries were able to reach portions of communities that conventional libraries could not—those living in rural communities, those who stayed at home because of limited mobility or medical issues, and people who couldn’t make time to come to the library themselves. 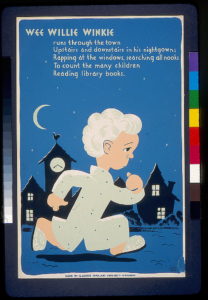 The Library Extension program, along with other educational and arts programs enacted by the WPA, helped increase literacy in the nation. At the onset of the Great Depression, many schools experienced dramatic budget cuts. Lack of funds even forced the State of Georgia to close public school systems for a time. The educational efforts of the WPA helped revitalize education, increase literacy, and improve the unemployment rate by preparing people for jobs being created during the New Deal.

The Goulding Table: A Nineteenth Century Tale of Twists and Turns