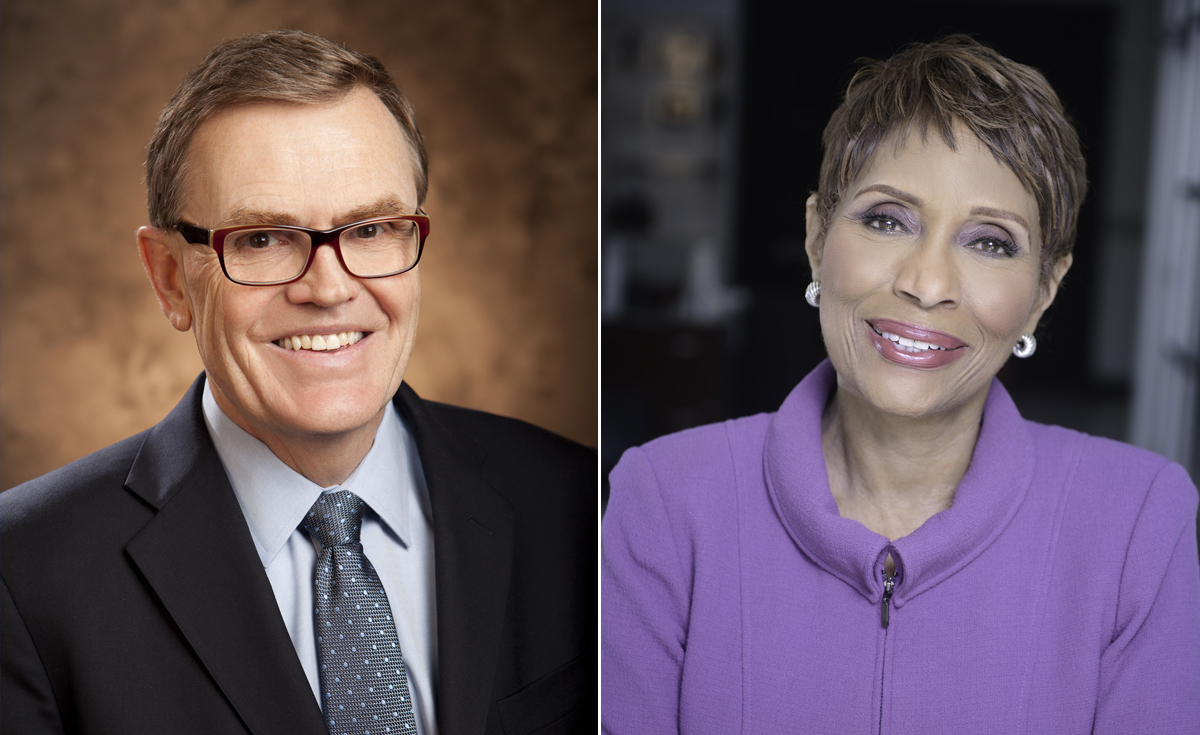 Atlanta, GA, November 12, 2020 – The Georgia Historical Society announced today that David Abney, the former CEO of United Parcel Service (UPS), business leader, and philanthropist, and Juanita Baranco, Executive Vice President and COO at Baranco Automotive Group, trailblazing entrepreneur, and community leader will be inducted by the Georgia Historical Society and the Office of the Governor as the newest Georgia Trustees on Saturday, June 5, 2021, during the statewide broadcast of the Trustees Gala. It is the highest honor the State of Georgia can confer.

“Given the dramatic events of this past year, I can’t think of two more appropriate people to induct as Georgia Trustees than David Abney and Juanita Baranco,” said Dr. W. Todd Groce, President and CEO of the Georgia Historical Society. “Both have overcome great adversity to reach the pinnacle of their careers; both have been visionaries who led by the example of their deeds as much as by their words. The positive impact they have had on those around them and their remarkable achievement in the face of great odds is testament to how the values that unite us—hard work, perseverance, and a commitment to doing right and putting others first—are more powerful than the things that divide.”

In conjunction with the Governor’s Office, the Georgia Historical Society reestablished the Georgia Trustees in 2008 as a way of recognizing Georgians whose accomplishments and community service reflect the highest ideals of the founding body of Trustees. The original Georgia Trustees were a governing body chartered and appointed by His Majesty King George II of England in 1732 to establish a new colony in North America.  They founded Georgia upon the principle of Non Sibi, Sed Aliis, “Not for Self but for Others.”  The Governor annually appoints new Trustees whose history-making accomplishments and service reflect the original Trustees’ ideals.

David Abney
David Abney is the former Executive Chairman of the UPS Board of Directors. He served as CEO of UPS from 2014 until May 2020 and was appointed Chairman of the Board in 2016.  Prior to his role as Chairman and CEO, Abney served as the company’s Chief Operating Officer, overseeing logistics, sustainability, engineering, and all facets of UPS’s global transportation network.  Abney began his UPS career in 1974 as a part-time UPS package loader in a small facility in Greenwood, Mississippi, while attending Delta State University.

Abney serves as a Trustee of the UPS Foundation and the Annie E. Casey Foundation and is a member of the World Affairs Council of Atlanta as well as the Business Roundtable.  In 2019, Abney received the prestigious Horatio Alger Award for perseverance, integrity and a commitment to excellence. During that same year he was elected and served as Chairman of the Metro Atlanta Chamber. He also serves on the boards of Macy’s, Inc., Northrop Grumman Corporation, and Catalyst, an organization working to accelerate and advance women into senior leadership and board positions.

A native of Greenwood, Mississippi, Abney earned a bachelor’s degree in business administration from Delta State University, where he and his wife, Sherry, sponsor the school’s annual symposium on international business.

Juanita Powell Baranco
Lawyer and entrepreneur Juanita Powell Baranco was born in the District of Columbia.  Raised in Shreveport, Louisiana, Baranco earned her B.S. and J.D. from Louisiana State University. Before turning to business, Baranco had a successful law career, including serving as Assistant Attorney General for the State of Georgia. She is the Executive Vice President and Chief Operating Officer of Baranco Automotive Group, which she co-founded with her husband, Gregory Baranco, in 1978. Baranco Automotive Group was one of the first African-American-owned car dealerships in the metropolitan Atlanta area. The Barancos also own several other car dealerships including Mercedes-Benz and Acura.

Her business and community activities have been recognized with numerous awards including recognition by the Dow Jones Company for entrepreneurial excellence; the first Trumpet Award from Turner Broadcasting System for entrepreneurial excellence; Entrepreneur of the Year by the Atlanta Business League; the DECCA Award from the Atlanta Business Chronicle; the YWCA’s Women of Achievement Award; and most recently the Blanchard Award for Outstanding Stewardship and Ethics in Business.  Baranco has been featured in Essence magazine as one of best businesswomen in Atlanta and was also a finalist for the 2003 Time magazine Quality Dealer Award.  She is a member of the American Bar Association and the State Bar Associations of Georgia and Louisiana.

For more information on the Georgia Trustees, contact Patricia Meagher, Director of Communications, at (912) 651-2125, ext. 153 or by email at PMeagher@GeorgiaHistory.com.