During the final stage of research on the civil rights movement, I examined archival collections at the Georgia Historical Society Research Center. Since I now have a firm understanding of the events surrounding the Savannah Protest Movement, I really wanted to know what life was like for African Americans living in Savannah after the city began to integrate in October 1963. A keyword search in the GHS Finding Aid Database brought up the A. Pratt Adams, Jr. Collection, MS 2165.

What I Found in the A. Pratt Adams, Jr, Collection

The first thing I learned while searching through the A. Pratt Adams, Jr. collection was that employment and discrimination in the work place remained a major concern for blacks. In a memo dated February 16, 1965, the author describes a meeting in which W.W. Law and other community members discussed segregation at recreation centers and hospitals, fair employment, and strategies that African Americans could use in order to obtain jobs at the same occupational level as whites. 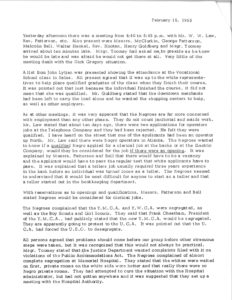 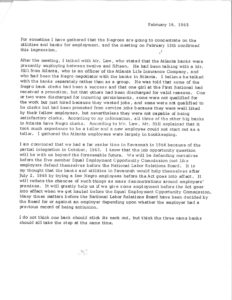 According to this document, many African Americans were interested in finding better quality work at utility companies and banks. W.W. Law said that two people applied for operator positions at a telephone company, but they were rejected. Since one person worked as an operator up North and had plenty of experience, Law believed they were not hired because they were black. Other documented instances of discrimination occurred at the Y.M.C.A., Y.W.C.A., and Memorial Hospital. Many complained that the hospital was still completely segregated­­—whites were waited on first and they received private and better rooms than African Americans, who were forced to share rooms.

The author of this paper is likely Mr. Adams himself. Whoever it was, they were certainly an advocate of businesses hiring African-American employees. One of their biggest reasons for supporting equal employment among blacks and whites was to reduce the chances of another protest movement in Savannah. Although demonstrations ended 2 years earlier, this letter supports the fact that the Savannah Protest Movement was successful and remained a significant event in public memory.

I have learned so much about the Savannah Protest Movement, but my work is not complete. After I finish researching, I will gather all of my findings into a comprehensive essay and, like always, cite my sources.
Proper Citation