An Honorable Defeat: The Last Days of Confederate Government

An Honorable Defeat: The Last Days of Confederate Government 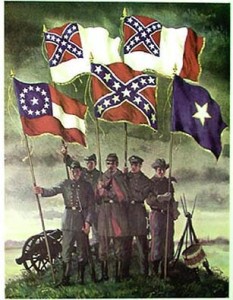 It is the dying days of the Confederacy. Richmond has been seized and Abraham Lincoln dies at the hands of a crazed actor turned assassin. Confederate President Jefferson Davis and his cabinet flee Richmond, with few possessions and gold from the treasury. Their winding paths bring them to Georgia, where they visited cities such as LaGrange and Washington, giving rise to the legend of Confederate gold (still accounted for) hidden somewhere in the hills of Georgia, beckoning modern day treasure hunters.

The Civil War has obvious connections to Georgia and should be a staple of a students’ education, but students often find history less than exciting and often just plain boring. With Jefferson Davis and Confederate General John Breckenridge as main characters, Virginia Tech professor William C. Davis writes less a history book than a student-friendly, adventurous account of the last days of the Confederacy, thereby allowing students to glimpse up close the events immediately following one of the greatest defeats in American history.

William C. Davis, a native of Independence, Missouri, was educated in Northern California, spent 20 years in editorial management in the magazine and book publishing industry, then left the industry in 1990 to spend the next decade working as a writer and consultant.

The author or editor of more than 40 books and numerous documentary screenplays in the fields of Civil War and Southern history, Davis was the on-camera senior consultant for 52 episodes of the Arts & Entertainment Network/History Channel series “Civil War Journal,” as well as a number of other productions on commercial and public television, including the BBC abroad. He has acted as historical consultant for several television and film productions, including “The Blue and the Gray,” “George Washington,” and “The Perfect Tribute.” Rights to his recent book Three Roads to the Alamo: The Lives and Fortunes of David Crockett, James Bowie, and William Barret Travis have just been sold to a motion picture production company.

Davis has twice been nominated for the Pulitzer Prize in History and is the only three-time winner of the Jefferson Davis Award given for book-length works on Confederate history. His more recent books are The Union that Shaped the Confederacy: Robert Toombs and Alexander H. Stephens and An Honorable Defeat: The Last Days of the Confederate Government.

“Davis’s work opens during the last four months of the Civil War, which saw Lee’s retreat from Petersburg, his stinging defeat at Sayler’s Creek, his surrender at Appomattox, the fall of Richmond, and Lincoln’s assassination. Davis (history, Virginia Tech Univ.; Jefferson Davis: The Man and His Hour) follows the contentious relationship of two men, rivals through circumstance but wedded by politics, who both collaborated and feuded during this period to advance their respective visions for the Confederacy. The two men were Jefferson Davis, the stubborn, imperious, and delusional leader of the Rebel forces, and the sensible and personable John C. Breckenridge, Davis’s Secretary of War, who worked tirelessly against his leader to achieve the best peace terms for the South. The book retraces the familiar but always riveting tale of the flight of these antagonists as they escaped from a disintegrating capital into the Deep South . Emphasis is given to their derring-do trials, the divergence of personalities in Davis’s party, the constant tension and deep mistrust between Davis and Breckenridge, and the ultimate fate of each fugitive. The author’s frequent segues to a contextual timeline add meaning and insight to his finely drawn and highly readable study. Recommended for all libraries.” Library Journal

“The latest book by Davis, a fine and prolific author on many Confederate topics, is as dramatic as his story of the Confederacy’s establishment, A Government of Our Own (1994). He opens on Richmond in January 1865, when John Breckenridge, loser to Lincoln in the 1860 election, has become the Confederate secretary of war. Breckenridge recognizes the futility of continuing a lost war and maneuvers to impress that upon Jefferson Davis. Their friction arises from Breckenridge’s goal to terminate the war and Davis’ obdurate determination to resist no matter how few soldiers are left to carry on. So Breckenridge, amidst dutifully preparing to evacuate the government from Richmond, solicits reports from such generals as Robert E. Lee to get the president to face facts. Davis never does, thanks to leadership limitations that the author tellingly recounts, which brings about a rather undignified dissolution of the Confederate government and the attempted flight of its leaders to exile. Breckenridge reaches Cuba in a harrowing adventure that caps a deftly told last chapter of the “Lost Cause.” – Booklist

“Davis tells his story in an open, accessible style, and his action-filled narrative is irresistible… popular history at its very best.” – Seattle Times

Of the many themes addressed in An Honorable Defeat Georgia, students may most identify with is, quite simply, honor in defeat. Davis’ book follows the historical figures in his book down a path rarely glimpsed; the path of keeping one’s pride despite suffering a staggering loss. Many students only want relate to the winners of a fight, and do not often see the merits that failure brings. The book allows students to see Jefferson Davis, a mighty man who accomplished much in establishing the Confederacy, in a dignified light, all the while fleeing from the relentless victor of the Civil War.

Students may also benefit from the book’s treatment of Historical Figures as real people. Davis’ style is less pedantic and more in the vein of good story telling. Students are often so far removed from larger-than-life images of Civil War figures that they are more likely to believe myth over fact. Placing Jefferson Davis and other characters in a believable, human light allows history to become more personal for students.

In February 1865, the end was clearly in sight for the Confederate government. Lee’s defeat at Gettysburg had dashed the hopes of the Confederate army, and Grant’s victory at Vicksburg had cut the South in two. An Honorable Defeat is the story of the four months that saw the surrender of the South and the assassination of Lincoln by Southern partisans. It is also the story of two men, antagonists yet political partners, who struggled during this time to achieve their own differing visions for the South: Jefferson Davis, the autocratic president of the Confederate States, who vowed never to surrender whatever the cost; and the practical and warm General John C. Breckenridge, Secretary of War, who hoped pragmatism would save the shattered remnants of the land he loved so dearly.

From Chapter 5: “I Cannot Feel Like a Beaten Man”
‘No welcoming committee met the presidential train at the Greensboro depot that cold and rainy morning. Most of the town was asleep, and when awakened, officials were none too forthcoming. Former Governor John Morehead offered the comfort of his substantial house to Trenholm and his wife, while Davis found lodging at the temporary home of his aide and kinsman John Taylor Wood. But the town had nothing to offer to the rest of the cabinet or Davis’ staff. In the end they had no recourse but to make do with living in a broken-down passenger coach with a leaking roof. The fact was that western North Carolina had never been strongly committed to the cause, its hilly reaches harboring strong pockets of Unionism just as did the high country throughout the South. Moreover, in the current state of disaster, the arrival of Davis and his government could only result in making Greensboro itself a target for Yankee raiders who, until now, had spared the city. No wonder ‘they found very few sympathizers,’ as the clerk Charles E.L. Stuart observed. William Preston Johnston, who wrote to his wife that, ‘we had a good time at Danville,’ could only say of Greensboro that they ‘got along,’ though when he sent Varina Davis a note, he sought to alleviate any concern she might feel for her husband and his official family by saying that ‘we are a fixture for the present and comfortable fixed.’ Looking back on the last few days, young Harrison confessed that ‘an age seems to me have passed.’

The best the government would get from Greensboro was what Wood himself described as ‘sullen indifference.’ Indeed, Wood’s own landlord protested initially at the notion of housing Davis even temporality in the Wood’s rented lodgings. He relented enough for the president to move into a small second-floor room with little but a bed, a writing desk, a handful of chairs, but Davis did not protest. It was likely the same room occupied by Varina just five nights before on her way to Charlotte, and she may have left letters for him with Wood. More than that, however, in the face of disaster, Davis felt the return of even more of his resolve, the sort that could be sustained only by unrealistic optimism. He had received a report from Lee himself of the surrender, and as a result he was no sooner off the train and established at Wood’s than he began to look for a silver lining. He wired Governor Vance that afternoon that reports of Lee’s surrender were unofficial. Confessing that the disaster must have been such that the Army of Northern Virginia no longer existed as an organized force, he began still to indulge the hope that Lee and his senior officers and large numbers of the men in the ranks might somehow have escaped capture. Such men, with Lee at their head, could be the nucleus of renewed resistance. ‘An army holding its position with determination to fight on, and manifest ability to maintain the struggle, will attract all the scattered soldiers and daily and rapidly gather strength,’ he declared. They must redouble their efforts. See the evidence of demoralization and outright disloyalty evident in Greensboro’s surly welcome, he warned the governor that ‘moral influence is waning,’ and urged him to do what he could to revive public spirit. Young Johnston echoed his chief’s sentiments when he declared the next day that ‘the loss of any army is not the loss of the cause’ and that ‘there is a great deal of fight in us yet.'”

Richmond Burning: The Last Days of the Confederate Capital
by Nelson Lankford

Government of Our Own: The Making of the Confederacy
by William C. Davis

Ashes of Glory: Richmond at War
by Ernest B. Furgurson

This is a wonderful, fully developed lesson plan focusing on the Civil War photographs of Matthew Brady. The project is a perfect backdrop to An Honorable Defeat, which brings students close to historical figures. Gauge the students’ response to the website activity and sections from An Honorable Defeat. Depending on students’ ability and interest, continue using An Honorable Defeat as you see fit.