Carry Me Home: Birmingham, Alabama: The Climactic Battle of the Civil Rights Revolutions

Carry Me Home: Birmingham, Alabama: The Climactic Battle of the Civil Rights Revolutions 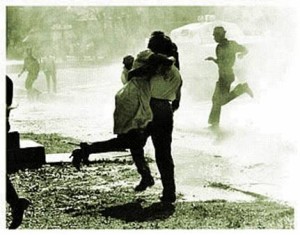 Diane McWhorter paints a stark portrait of a city in crisis. Birmingham, once known as the Magic City, finds itself saddled with a much worse nickname in 1963: Bombingham. In the midst of Klu Klux Klan attacks, police unleashing attack dogs on child protestors, and a church bombing that claimed the lives of four young girls, America’s second emancipation was born. McWhorter, herself a Birmingham native, combines personal memories with interviews and hard research, to expose readers to one of the greatest struggles our country has known: the struggle for equal rights.

Despite Georgia students’ relatively close proximity to Birmingham and the events there that shaped the Civil Rights movement, many of them do not understand or appreciate the role this city and its inhabitants played in the struggle for equality. Allowing students to read and interpret passages from McWhorter’s book helps bring history into stark relief and allows them to see how important it is to remember the struggles and sacrifices made during the turbulent ’60s.

Diane McWhorter is an American journalist and commentator who has written extensively about race and the history of civil rights. She is the author of the Pulitzer Prize-winning Carry Me Home: Birmingham, Alabama–The Climactic Battle of the Civil Rights Revolution (Simon & Schuster, 2001) and A Dream of Freedom, a young adult history of the civil rights movement (Scholastic, 2004). She is a long-time contributor to The New York Times and has written for the op-ed page of USA Today, Slate, and many other publications. She is originally from Birmingham, Alabama and now lives in New York City

‘The story of civil rights in Birmingham, Alabama, has been told before from the unspeakable violence to the simple, courageous decencies, but fresh, sometimes startling details distinguish this doorstop page-turner told by a daughter of the city’s white elite. McWhorter, a regular New York Times contributor, focuses on two shattering moments in Birmingham in 1963 that led to “the end of apartheid in America”: when “Bull Connor’s police dogs and fire hoses” attacked “school age witnesses for justice,” and when the Ku Klux Klan bombed the 16th Street Church, killing four black girls. McWhorter binds it all together with the strong thread of a family saga, fueled by a passion to understand the father about whom she had long harbored “vague but sinister visions” and other men of his class and clan.’ – ‘Publisher’s Weekly

‘An exhaustive journey through both the segregationist and integrationist sides of Birmingham’s struggle…Contributes significantly to the historical record.’ – New York Times Book Review

Of the many themes addressed in Carry Me Home Georgia students may most identify with is Self Reflection. McWhorter accomplishes a daring feat in her book: she turns the critical eyes of a journalist upon her own family and asks the hard question: were we, in some ways, party to the horrible events that plagued Birmingham? McWhorter faces the possibility that her father may have been involved in the KKK once, and she makes a conscious effort to believe her father when he denies any involvement. Many high school students have deep family bonds that often blind them to harmful or illegal activities their family members partake in. McWhorter shows students it is important to go behind familial ties in favor of justice.

Students may also benefit from the book’s treatment of Privilege and Class. McWhorter, only ten years old when the 16th Street Baptist Church Bombing occurred, was hardly affected. As a member of Birmingham’s white elite, the troubles plaguing African Americans barely registered with the young girl until later. In fact, the poisonous cloud that hung over the city during McWhorter’s youth infiltrated her spirit, though it wasn’t until many years later that she dealt with those feelings by writing Carry Me Home. Many Georgia students live at or below the poverty level, and may have difficulty with a white New York Times reporter discussing such personal milestones in the Civil Rights Movement, but they may also be challenged by the following essential questions: How does class and privilege affect one’s point of view? Is it better to be a member of the ‘social elite’ and rarely deal with harsher realities of life, or is better to be excluded from the elite class and be directly involved with the changing history? What does class mean?

Birmingham was a polarized city in 1963. A former sportscaster turned City Commissioner of Public Safety often took to the streets in an armored tank in order to frighten and control those whom he referred to as ‘lawless Negroes.’ A section of the city had been dubbed ‘Dynamite Hill’ due to the number of homes bombed by KKK members and disreputable citizens who operated under the tacit consent of Birmingham leaders. The Magic City, the Pittsburgh of the South, was now a haven for criminals and a spawning ground for savage intolerance and yet another side of the city existed in relative peace. The white elite of Birmingham were safe in their large homes and more focused on who would win the Iron Bowl than the demonstrations occurring downtown in Kelly Ingram Park . The balance between social change and social cruelty shifted when a bomb exploded in the basement of the 16th Street Baptist Church, claiming the lives of four young girls. The tragedy received worldwide attention, and Birmingham was finally dragged kicking and screaming into the long overdue world of equality. It is against the backdrop that McWhorter revisits her own past and searches for reasons during one of the darkest periods in American history.

The absolutism of segregation in Birmingham had created a thriving Negro universe just northwest of the ‘white’ retail center downtown. Fourth Avenue North was a grimy commercial strip of cafes, hotels, and shoeshine parlors whose proprietors worked the street like a convention of glad-handing mayors. A residential neighborhood rumble into the business district’s shotgun houses without plumbing right up against the white clapboard Victorian where Lionel Hampton spent his early childhood in the care of his grandparents. On game days, the Black Barons caravanned down Fourth Avenue on the way to Rickwood Field, preening on the hoods of cars in their crisply laundered uniforms. This year’s team was headed to the Black World Series, behind a teenage outfielder from TCI’s black mill town, Willie Mays.

The Fourth Avenue district was a monument to white man’s fantasy that segregation was just and rational. But it also mirrored his most primitive anxieties about sex, disease, and death. Racism was the province of Freud as well as Marx, of phobia as much as self-interest, and the fear that motivated segregationists most viscerally concerned the consummate act of integration, bodily consummation. That explained why the most successful business: around Fourth Avenue were those that performed the comprising organic service. White entrepreneurs were so repelled by the idea of infusing Negro corpses with embalming fluids that black funeral homes operated free from Caucasian competition. Disgust for ‘burr heads’ (on the part of both races) had exalted black hairdressers as alchemists who ‘conked’ the kinks from Negro coiffures. ‘Dr.’ Ruth Jackson, who boasted a P.H.D., or Professional Hair Dressing degree, had lobbied the legislature for black beauticians and opened what was said to be the only beauty culture museum in America. Thus had Birmingham’s Negroes finessed pride from shame.

On April 26, 1948, three policemen went over to Fourth Avenue and walked into the district’s architectural anchor, the ‘skyscraper’ built by Alabama’s black Masons, who boasted of having the largest fraternal lodge in the nation. The detectives’ destination was the fourth-floor headquarters of the Southern Negro Youth Congress, a remarkably broad-based region-wide coalition of class and mass, professor and mill hand, conservative and radical. Over the past decade, they had been inventing the black struggle for freedom. And it was Bull Connor’s good fortune that the spark plugs of the movement were Communists.

The object of the police’s attentions at the SNYC offices was the organization’s executive secretary, Louis Burnham, a thirtyish graduate of the City College of New York who seemed made for the expression ‘born leader.’ He was the last of the talented young black Communists who had come to Birmingham to command the Congress’ far-flung network of activists. And for that offense he was escorted a few blocks east to the stripped-down Art Deco tower that was city hall for an audience with Bull Connor.

Then he read, ‘Young Southerners suffering the daily injustices of the Klansmen’s law.’ He fixed his eye on Burnham and said, ‘There’s no Klan here, but there will be if you persist with this meeting.’

Not only did Connor know there was a Klan in Birmingham, he was its patron saint.

A Dream of Freedom: The Civil Rights Movement from 1954 to 1968 by Diane McWhorter

Freedom Riders: 1961 and the Struggle for Racial Justice (Pivotal Moments in American History) by Raymond Arsenault

The Last Hotel for Women by Vicki Covington

Show students the first half of Spike Lee’s documentary 4 Little Girls. When they have finished viewing the selection, have them work in small groups or with partners to write a poem, a formal response, or a drawing in response to the film. If there is still time, allow students to read a portion of Carry Me Home and have them evaluate the content and writing.

Gauge the students’ response to the film and the book. If they are interested in the documentary, allow them to watch the remainder of 4 Little Girls. Depending on students’ ability and interest, continue using Carry Me Home as you see fit.