The Georgia Historical Society recognized Georgia-Pacific with a new Georgia historical marker as the latest honoree of the Georgia Business History Initiative.

The historical marker was dedicated at the Georgia-Pacific Center in Atlanta, on Tuesday, September 26, 2017.

Owen R. Cheatham founded the Georgia Hardwood Lumber Company in Augusta, GA, in 1927.  By 1938, the company operated five lumberyards in the South. To broaden its product line, the company purchased its first Pacific Coast facility—a plywood plant—in 1947. In 1948, the company was renamed Georgia-Pacific Plywood and Lumber Company and was listed on the New York Stock Exchange in 1949. Its first operation outside North America began in the Philippines in 1963.Georgia-Pacific Center, the company’s corporate headquarters, was built in 1982 on the site of Loew’s Grand Theatre, where Gone with the Wind premiered in 1939. At its 90th anniversary in 2017, Georgia-Pacific was one of the world’s leading manufacturers of consumer products, building products, packaging, and pulp with tens of thousands of employees across the globe, including 7,500 in Georgia.

Erected by the Georgia Historical Society and Georgia-Pacific 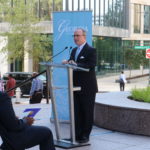 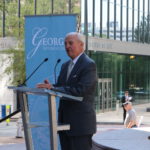 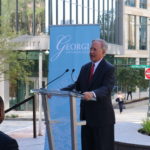 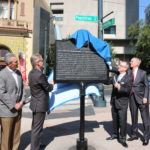 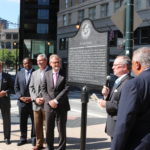 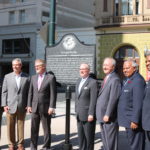 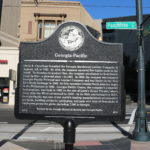