GHS welcomes SunTrust as an honoree of the Georgia Business History Initiative. A Georgia historical marker for SunTrust was dedicated on December 3, 2019. The marker is located at the site of its historic 1893 headquarters at 25 Park Place NE in Atlanta.

SunTrust Bank played a key role in the New South’s economic growth in the late nineteenth and twentieth centures and became the largest bank headquartered in Georgia. In 1891 the Georgia General Assembly chartered the Commercial Travelers’Savings Bank in Atlanta. In 1893 the renamed Trust Company of Georgia moved into the South’s first “skyscraper” located at this site. Ernest Woodruff became president of Trust Company in 1904 and under his leadership the company orchestrated a series of mergers that secured the bank’s position as Georgia’s leading financial institution. In 1919 Trust Company provided underwriting services to the Coca-Cola Company, and the two institutions drove Georgia’s economic growth in the mid-twentieth century. In 1985 Trust Company merged with SunBanks Inc., becoming SunTrust Bank. In 2019 SunTrust merged with BB&T to create Charlotte, NC-Based Truist Financial Corporation.

Erected by the Georgia Historical Society and SunTrust Bank 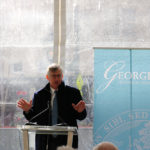 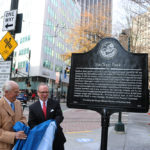 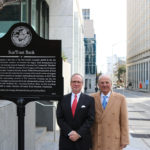 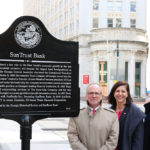 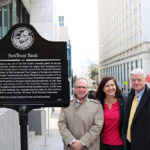 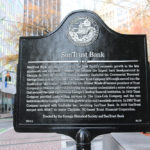