Drafter and Signer of the Constitution

Drafter and Signer of the Constitution

From the beginning of his arrival in Georgia, Abraham Baldwin was a recognized leader in the state, filling a role the state was very much in need of following the Revolutionary War. Loyalists, who had been banished from the state, had previously been the educated leaders governing during colonial times. With the confusion about the government after the Revolutionary War, Baldwin, who was wise, kind, educated, and intelligent filled this vital role, representing his state and proving to be a national asset through the drafting and ratification of the U.S. Constitution.

Delegate to the Constitutional Convention

Moving after the war, Baldwin lived in Wilkes County. He was practicing law and was working very hard to establish the University of Georgia. The citizens of Wilkes County had also elected him to be a representative in Georgia’s legislature.

In 1787 Baldwin served as a delegate to the Constitutional Convention in Philadelphia. While Georgia had other delegates to attend, it was Abraham Baldwin and William Few who stayed through all of the debate and signed the constitution.

The work of the Constitutional Convention in 1787 involved making many difficult decisions about our country’s government. The delegates represented different states and had different visions about how the states should work together to form one federal government.

Abraham Baldwin worried that  the delegates would not be able to come to an agreement, and he worried that our country would not have a strong federal government. As anger and frustration increased at the Constitution Convention, Baldwin observed carefully. Despite being from a larger state, when the final vote was made, Baldwin sided with the smaller states in favor of equal representation. By doing so, he split the vote and ended the contest for the time being so a real compromise could be worked out..

A special committee was formed with one delegate from each state. Baldwin was chosen to represent Georgia.  In order to settle the matter quickly, the committee went straight to work on a solution. Their work resulted in The Great Compromise – a bicameral legislature – which included the Senate (or upper house) where each state would have equal representation, and the House of Representatives (or lower house) where the number of delegates would be determined by each state’s population. This agreement is sometimes called the Connecticut Compromise.

Abraham Baldwin’s wisdom and leadership helped provide  the opportunity for discussion that led to the Great Compromise of the Constitutional Convention. This action secured his legacy as a Founding Father. Additionally, Baldwin sat on the committee charged with working out the details of the transfer of government under the Articles of Confederation to a new government under the Constitution. Baldwin’s working copy of the Constitution, with his handwritten notes visible in the text and along the margins, is in the collections of the Georgia Historical Society. The content of this edition varies slightly from the final version adopted in 1787 and ratified by the states. 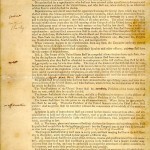 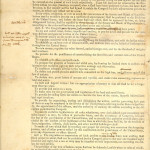 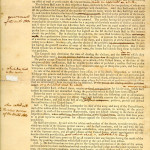 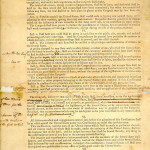