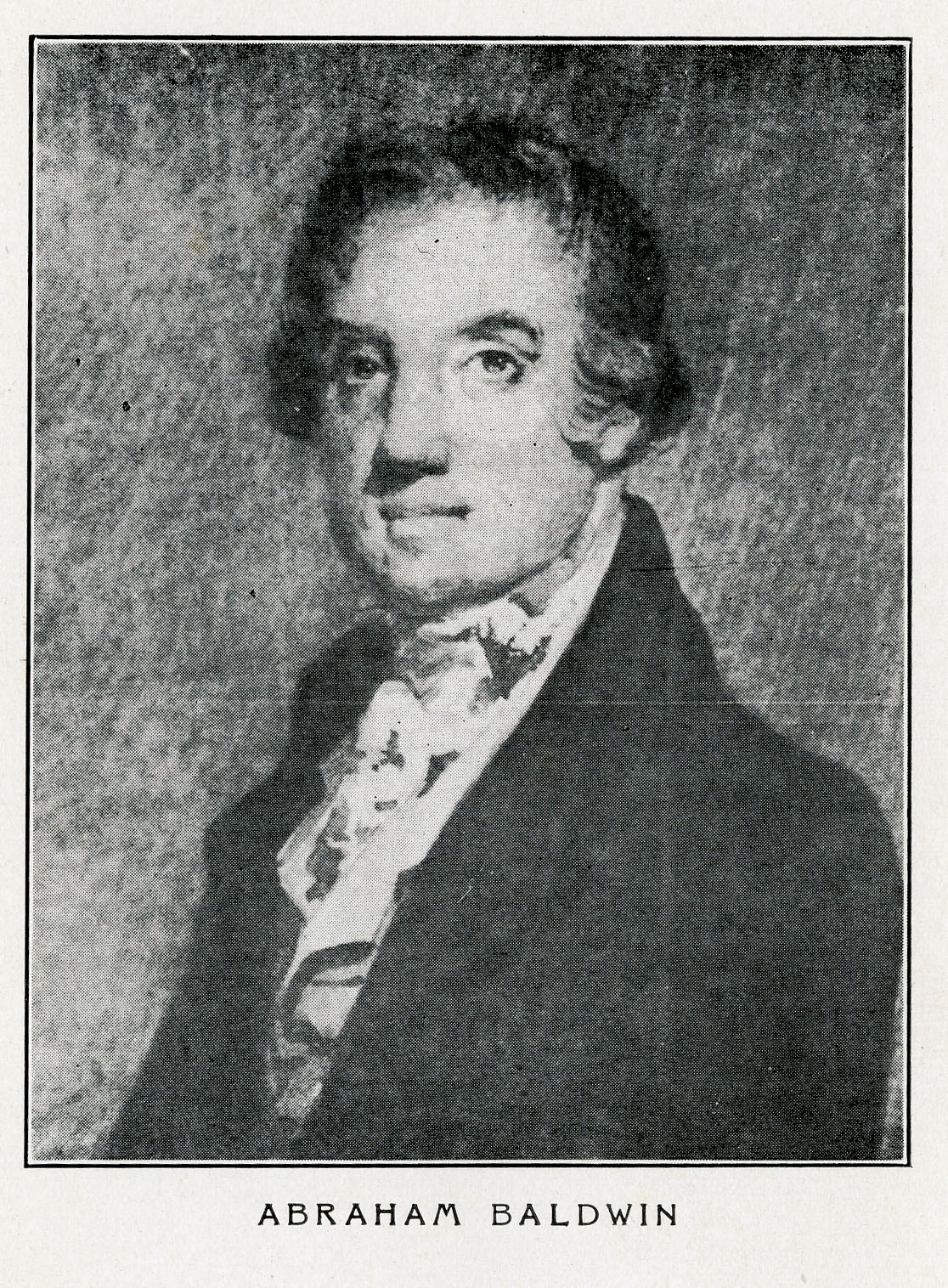 The son of a blacksmith, Abraham Baldwin (1754-1807) was born in North Guilford, Connecticut on November 22, 1754.  At the age of fourteen he entered Yale College where he studied theology in preparation for life as a minister.  After graduating, Baldwin instead opted to remain at Yale as a tutor for several years before joining the Revolutionary Army as a chaplain in 1779.  After the war, he studied law and was accepted to the Connecticut bar.

Though his reasons for initially coming to Georgia are not entirely clear, he received a grant of land in Wilkes County, and soon after his 1783 arrival in the state he settled near Augusta, which was shortly to become Georgia’s capital.  There he established a successful law practice and entered politics, winning election to the Georgia Assembly as a representative from Wilkes County.

Baldwin had a life-long interest in education, believing it vital to the development of the new state.  In fact, it may have been his interest in state-supported education that brought him to Georgia.  Regardless, soon after Baldwin’s arrival Georgia Governor Lyman Hall convinced him to accept responsibility for overseeing the development of a statewide plan of education at the secondary and university level.  In February 1784, Baldwin was appointed to a committee to oversee the management of a 40,000-acre endowment of land intended for the development of a new college.  He wrote what became the first charter for the establishment of a state-supported university in the new republic and saw it adopted by the legislature in January 1785.  Baldwin also accepted the position of first university president, a position he held throughout the long planning phase of what would become the University of Georgia.

During this time, 31-year-old Baldwin was appointed with three other men to represent Georgia at the Continental Congress meeting in Philadelphia to determine a course for the new country.  In 1787, he became one of two Georgians to sign the new U.S. Constitution.  During the long debates over the development of this new document, Baldwin was instrumental in accomplishing the Great Compromise of the Constitutional Convention – establishing the voting structure for the two houses of Congress.  In the end, he voted with the small states in favor of an Upper House with equal representation and a Lower House with representation based on population. Though his action split the Georgia vote, it arguably saved the Convention.

Following his tenure with the Constitutional Convention, Baldwin was elected to the U.S. House of Representatives for five consecutive terms.  He was then elected to the Senate for two terms, where he also served as President Pro-Tem for a time.  During his legislative career, Baldwin’s major contributions were made through committee work.  He was a frequent supporter of the policies of Thomas Jefferson and worked often with James Madison.  It was immediately following the close of the ninth congress that Abraham Baldwin, who never married, died at the age of 53.  He is buried in Rock Creek Cemetery in Washington, D.C.