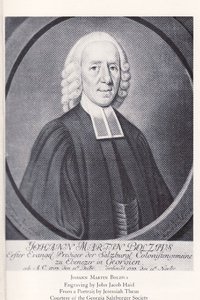 Born in Forst, Germany, John Martin Boltzius is best known for strongly opposing slavery during the early years of the Georgia colony, and for serving as senior minister to the colony’s German-speaking Protestants called Salzburgers.  The first group of Salzburgers sailed from England to Georgia in 1734, arriving in Charleston, South Carolina, on March 7, then proceeding to Savannah on March 12.  Boltzius was met by General James Oglethorpe when the first group of Salzburgers arrived in Georgia from England in 1734.  Oglethorpe assigned Boltzius and his group about twenty-five miles upriver in an area on Ebenezer Creek.  Boltzius and the Salzburgers named their new settlement Ebenezer.Boltzius saw primarily to the spiritual care of the colonists, but soon took responsibility for their physical well being.  He was opposed to corporal punishment, preferring to admonish colonists for their misdeeds instead.  Boltzius also left behind an important description of the task system under which many enslaved workers labored in lowcountry Georgia.  He worked unceasingly for the good of the colony, eventually establishing the colony’s first water-driven gristmill.  Boltzius and the Salzburgers also created the first Sunday school in Georgia in1734, followed by the first orphanage in 1737.  The Salzburg community survived the American Revolution, Sherman’s occupation, and an 1886 earthquake.  Boltzius’ Jerusalem Church houses the oldest Lutheran congregation America to conduct worship in its original building.

Adapted from the New Georgia Encyclopedia article on John Boltzius

George Fenwick Jones, The Salzburger Saga: Religious Exiles and Other Germans along the Savannah (Athens: University of Georgia Press, 1984).

From the GHS Collection: