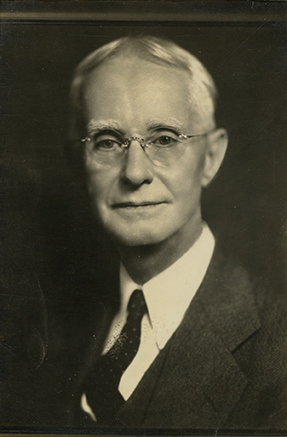 Charles Herty (1876-1938) was truly a renaissance man—a chemist, an athletic supporter, and a visionary in the field of forestry and paper production. Born in Milledgeville, Georgia, Herty went on to study chemistry at the University of Georgia in Athens and then received his Doctorate in Chemistry from Johns Hopkins. Herty returned to UGA, where he taught chemistry and became very involved in bringing back to life the stagnant athletic program. He was responsible for organizing UGA’s first real football team and raised money for improved athletic facilities.

Herty enjoyed a celebrated career as a chemist in the academic and industrial settings. In 1901, he developed an innovative cup and gutter system for collecting resin from pine trees. The system replaced the destructive box system and helped save the South’s naval stores industry from the threat of deforestation.

During the Great Depression, Herty focused on alleviating economic hardship in the South by promoting the use of chemistry to develop new and profitable industries. Specifically, Herty hoped to develop a thriving newsprint industry in the South using pine trees. Northern companies insisted that pine was an unusable material for pulpwood production due to its high resin content. Herty disagreed, and eventually received grants from the Georgia Legislature and the Chemical Foundation to conduct research at his laboratory in Savannah. His experiments proved that young pine trees could make quality paper pulp by using an acidic sulfite solution to digest the wood. Herty’s gamble paid off—two leading publishers in Texas and Oklahoma invested in the South’s first newsprint mill. Though Herty did not live to see the completion of the plant, he lived long enough to see the financing for the project secured.