Growing Up in Savannah

Growing Up in Savannah

“When I was twelve I made up my mind absolutely that I would not get any older. I don’t remember how I meant to stop it.” ~ Flannery O’Connor

Flannery O’Connor spent the first thirteen years of her life in Savannah. She was born at St. Joseph’s Hospital on March 25, 1925, to Regina Cline O’Connor and Edward Francis O’Connor, Jr. Her parents named her in honor of Mary Ellen Flannery a relative on her mother’s side of the family. Through her mother, Flannery was connected to two of the most well-known and respected Irish-Catholic families in Georgia, the Cline family and the Flannery family. In fact, one of the buildings at St. Joseph’s was named the Flannery Memorial Chapel in honor of Captain John Flannery, one of her relatives.

Flannery’s home was a three-story row house at 207 Charlton Street on Layfette Square. From her parent’s upstairs window, Flannery could see the steeples of The Cathedral of St. John the Baptist. Flannery was baptized, confirmed and attended Mass there regularly. Flannery stayed a faithful Catholic her entire life and her novels and stories are famous for their religious themes.

As an only child, Flannery got plenty of attention from her loving parents and many family members in Savannah and Milledgeville. Cousin Katie Semmes moved in next door and provided financial support to Flannery’s family. Cousin Katie’s father, Captain John Flannery, left almost a million dollars to her when he died in 1910. Family connections helped Flannery’s parents get through the financial troubles of the Great Depression.

Flannery had some interesting hobbies and interests growing up. One of her hobbies got the attention of Pathé News. Flannery loved birds and had taught one of the bantam chickens raised in her backyard how to walk backwards. A cameraman from the newsreel company shot a few seconds of the bird walking backwards and turned it into a short film. Light-hearted clips like Flannery’s backward walking chicken were often played along with the news before a feature film at the movie theater. Visit the British Pathe website to watch the short yourself.

The future famous author loved reading and writing at a young age. However, Flannery did not enjoy every book she read. In her copy of Lewis Carroll’s Alice’s Adventures in Wonderland, Flannery wrote this bad review “Awful, I wouldn’t read this book.” Flannery liked to write stories about a family of ducks that traveled the world. At the age of ten, Flannery wrote a series of short stories poking fun at her relatives. Her father loved it so much he had it typed and bound.

In 1937, Flannery’s father began to get sick. At first doctors thought he had rheumatoid arthritis, eventually he was diagnosed with lupus erythematosus. As an adult, Flannery suffered from the same disease.

Flannery’s time in Savannah came to an end in 1938 when her father got a job in Atlanta as a real estate appraiser for the newly formed Federal Housing Administration (FHA). This was a stressful time for Flannery and her family. Flannery had to move to a new home and start fresh at a new school all while her father’s health continued to get worse.

Explore Flannery O’Connor’s Savannah. Click on the images to see a larger image. 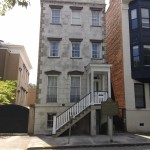 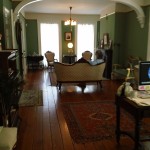 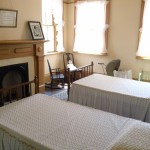 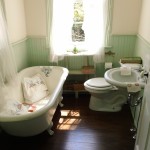 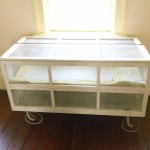 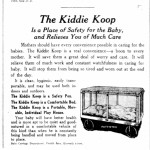 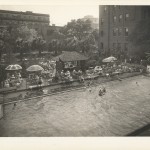 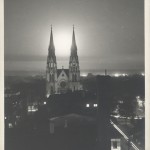 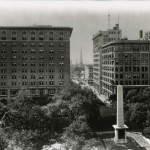 Continue to A Short Stay in Atlanta