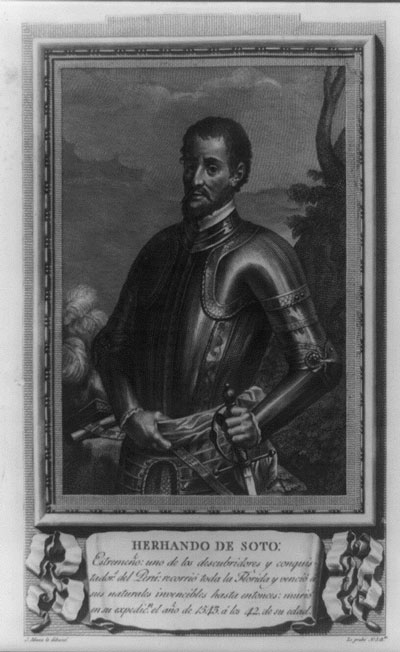 Hernando de Soto was born c.1496/97 in Extramadura, Spain. Although minor nobility, his family was of modest means, and de Soto dreamed from a young age of making his fortune as a conquistador. As a young teenager de Soto participated in Pedro Arias Dávila’s conquest of Panama and Nicaragua and subsequently earned his fortune as a slave trader. In 1531 he participated in the conquest of Peru as Francisco Pizarro’s chief lieutenant and returned one of the wealthiest conquistadors in Spain.

In April 1538, de Soto left Spain with ten ships, about 600 men, and a royal commission to conquer La Florida (now the southeastern United States). Known best as the first Europeans to reach and cross the Mississippi River, de Soto and his men were also the first Europeans to explore the interior of what is now Georgia. Landing in Tampa Bay in May 1539, de Soto’s entrada covered approximately 4,000 miles throughout the southeastern United States, first entering present-day Georgia in March 1540.

De Soto’s conquering army engaged in frequent violent encounters with natives during their expedition, resulting in high casualty counts among both the natives and among de Soto’s men. But it was a fever that ultimately led to de Soto’s death in May 1542. Under the leadership of his successor, Luis de Moscoso, what remained of the original party floated on rafts down the Mississippi River and reached Mexico in 1543.