De Soto’s initial assumptions about the Native Americans inhabiting La Florida turned out to be very wrong. He embarked on his journey believing that the indigenous peoples he encountered would be similar to the Incas he interacted with in Peru – willing to serve as reliable guides and extremely wealthy. However, the natives de Soto and his men encountered were completely different. They developed a mistrust of Spanish explorers from earlier encounters with Juan Ponce de León and Pánfilo de Narváez, rendering them unwilling or reluctant to serve as guides through the territory. They were also divided into several different and relatively small tribes and kingdoms, which was completely different from the Incas of Peru and the Mayans of Mexico. These tribes also lacked access to, or at least knowledge of, materials the Spanish considered valuable such as gold and silver.

De Soto and his men faced problems with the natives early in their journey. They quickly discovered that the guides they had kidnapped to lead them along their journey before their final departure from Cuba did not know the mainland  interior nearly as well as the Spanish anticipated. For example, one guide admitted he had never ventured more than ten miles in any direction from where the advanced convoy picked him up in Florida.

Throughout the expedition, they continued to struggle to find natives willing to help them find their way. The first native peoples they encountered upon landing in Florida had already made contact with the Spanish when Pánfilo de Narváez arrived there in the late 1520s. This experience, wrought with violent encounters, taught the natives to be apprehensive of Europeans. 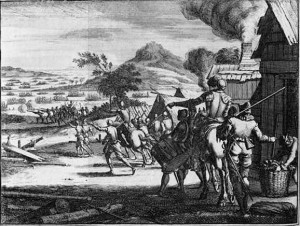 Native American guides often  gave the entrada misleading information about the location of larger settlements in order to protect them from the conquistadors. De Soto and his men, upon finding such villages, often used violent methods to commandeer their food stores and other resources that were needed to supply their army. They were not concerned with leaving the natives whose food they consumed with enough provisions to continue feeding their own populations. Having heard of the decimation and destruction de Soto and his men caused other villages, some of the Natives American villages located along later parts of the Europeans’ path were armed and ready to defend themselves once de Soto arrived. De Soto did not hesitate to respond with full force. Instances such as these resulted in several battles between de Soto’s army and the natives, resulting in large losses on both sides.

De Soto’s journey had a significant impact on the Native Americans of North America. He and his men were the first contact the majority of these tribes living in the interior had with Europeans, and they brought more than violence with them.

The native tribes that encountered de Soto had never before seen several of the animals the entrada brought with them . They were introduced to horses, war dogs, and pigs for the first time through these meetings. Although the natives were terrified of the Spanish dogs, as they were extremely large and trained for combat, they quickly learned about and took advantage of the benefits associated with the domestication of horses and pigs.

However, the most significant impact on the native population from de Soto proved to be disease. The native tribes, having never made contact with Europeans, did not have any form of immunity to European diseases. The most detrimental of the illnesses they acquired turned out to be smallpox. It spread rapidly through the native population, eradicating their numbers by as much as 90 to 95 percent. This resulted in several of the villages and peoples de Soto came into contact with on his mid-sixteenth century expedition ceasing to exist by the time the English made inroads into the same territories. The English did not encounter the same towns or chiefdoms.

Continue to Death and Legacy