Before leading his own men on a conquest of La Florida, Hernando de Soto gained experience and fortune as a conquistador on expeditions throughout Central and South America under the leadership of others. He participated in Pedro Arias Dávila’s conquests of Panama and Nicaragua and served as Francisco Pizarro’s chief lieutenant during his conquest of Peru. .

These adventures allowed him to gain the military experience, leadership skills, and wealth necessary to achieve his goal of leading his own conquest of the New World.

In April 1514, Pedro Arias Dávila departed from Spain to command an expedition of Panama. After stopping at a few Caribbean Islands along the way, the initial group arrived in the Central American country in June. Despite the swampy, hazardous conditions surrounding them, they were convinced that the region held vast amounts of gold. De Soto was one of over two thousand men that served under Dávila on this conquest.

Dávila was young de Soto’s first example of a conquering leader. He ruled over his men in a strict manner, not hesitating to execute anybody that disobeyed him. He also treated the natives he encountered in a harsh manner, extracting their resources for his settlers’ use and employing violence against them with little hesitation. De Soto spent approximately the next two decades participating in various expeditions throughout different portions of Central America under the leadership of Dávila and other explorers. He also led a few explorations throughout the region, such as the 1524 conquest of El Salvador and Honduras.

De Soto spent the majority of his time in the modern countries of Panama and Nicaragua. During this time, in addition to exploring, he also built his wealth through various business practices. De Soto owned a large plantation, or hacienda, in Nicaragua and also formed a business partnership with two other men, Hernán Ponce de León and Francisco Compñón. The three made their fortunes by sharing ownership of a gold mine and participating in the Central American slave trade. After Compñón’s death, de Soto and de León also owned a shipping company. By 1530, he had become one of the richest men in Central America. 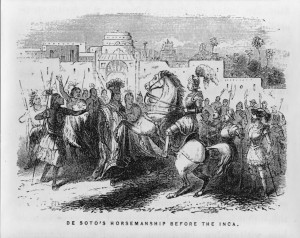 Two years later, in 1532, Francisco Pizarro appointed Hernando de Soto as his chief lieutenant for his conquest of Peru. After his arrival in the South American territory, de Soto was the first Spaniard to make contact with the Inca leader Atahualpa. Soon after, the Spanish took the leader captive after a conflict at Cajamarca. They held him prisoner while demanding a hefty ransom – a large room filled with gold and silver. During this time de Soto often communicated with Atahualpa and remained on relatively friendly terms with him. However, when de Soto was sent away by Pizarro on another assignment, the Spanish killed the leader in order to prevent his return to the Inca people.

The Spanish continued to make advances into the Inca Empire after killing their leader. They captured the wealthy capital city of Cuzco in the latter half of 1533. Pizarro appointed de Soto the lieutenant governor of the city while he proceeded to continue further inland. During this time, de Soto accumulated wealth far beyond what anyone could previously imagine. He proceeded to assist Pizarro in establishing the city of Lima, which would serve as the Spanish capital of the territory. Once conflict erupted between Spanish leaders, de Soto decided that it was time for him to return home after approximately thirty years of being away.

The riches de Soto acquired as a high-ranking conquistador of the Inca Empire in addition to the money he accumulated from the slave trade made him one of the wealthiest men in Spain upon his return in March of 1536. Despite these riches and his high social status, he was not content to remain in his homeland and enjoy his success. He went about attempting to plan his own expedition of the New World soon after he arrived.

De Soto heard details about La Florida, Spain’s newly claimed territory in North America, from Spanish explorer Álvar Núñez Cabeza de Vaca. De Vaca was one of the few survivors of Pánfilo de Narváez’s ill-fated expedition that was meant to colonize La Florida.. The explorer described the territory favorably, emphasizing the riches he believed it possessed. This inspired de Soto to lead an expedition he believed would establish a new settlement for Spain in a vast, mysterious land that would provide him and Spain with vast riches and resources.