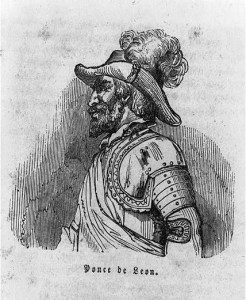 Juan Ponce de León was the first Spanish explorer to set foot in the southeastern United States. He was born ca. 1460 into a noble family. He spent some time in the royal court of Spain before entering the military and gaining experience fighting against the Moors in Grenada. After they were effectively defeated in 1492, Ponce de León joined Christopher Columbus on his second voyage to the Americas the following year. There, he became a provincial governor of Hispaniola (1502) and governor of Puerto Rico (1509) after he led an expedition to and settled the island.

The Spanish government encouraged the conquistador to use his experience to continue exploring the New World. Some historians suggest that this request was fueled by rumors that a fountain of youth existed on an island somewhere north of Spain’s current settlements in the Caribbean. Regardless of the motivation, Ponce de León set sail from Puerto Rico in March of 1513 to explore the areas north of the island. The next month, he landed on the east coast of the modern-day state of Florida near Daytona Beach. He believed that he had landed on an island, not the continent of North America. Nevertheless, he claimed the entire area for Spain and named it La Florida. After a short time, the expedition left and sailed around the Florida peninsula before returning to Puerto Rico.

Upon his return, Ponce de León began planning a second trip to the newly discovered region. He obtained permission from the King of Spain to conquer and settle the region after being granted the title of governor. In 1521, he set sail again for the region with approximately two hundred men and two ships. The entrada landed near Charlotte Harbor, located along the Gulf of Mexico. Soon after, the Calusa tribe attacked the invading Spaniards. Ponce de León was injured by an arrow in the fight. He and his men then retreated back to Spanish territory in Cuba, where he ultimately died as a result of this injury.

Lucas Vázquez de Ayllón was a Spanish explorer born around 1475. He owned a lucrative sugar plantation and served as a government official on the island of Hispaniola. After hearing from slave traders about a territory in North America that contained a large native population, he petitioned the Spanish crown for permission to explore and settle the area in hopes of enslaving the native population to grow cash crops such as sugar cane. He obtained a license in June of 1523 that instructed him to explore the area, learn about the region, search for valuable resources, and find out how the Spanish could conquer the territory.

De Ayllón set out to explore the region in 1525. He and his crew created a rough map of the land between modern day Florida and Delaware by sailing along the Atlantic coast of North America. The creation of this map fulfilled the exploration portion of his contract with the crown. After seeing the area, de Ayllón decided to fund and organize his own expedition to create a settlement. In 1526, he embarked for North America with approximately 600 colonists (including women and children) and six ships. They initially landed in Winyah Bay, South Carolina, but de Ayllón determined that this area was unsuitable for a settlement due to its acidic soils and relatively small native population.

The expedition then ventured south. They eventually found an area de Ayllón determined fit for their settlement. Although the exact location is not known, some historians believe that it was on one of Georgia’s barrier islands, Sapelo. There, de Ayllón established San Miguel de Gualdape on October 8, 1526, which became the first Spanish settlement in La Florida. The colonists built a community complete with houses and a church. However, they were unable to plant crops due to the lateness of the year. Colonists, including de Ayllón, soon began falling sick and dying at a relatively rapid rate. Three months after the colony was established, the remaining colonists began a deadly winter voyage back to Hispaniola. Only 150 out of the original 600 colonists returned alive.

Pánfilo de Narváez was a conquistador born around 1470. He originally participated in conquests of Jamaica and Cuba. He gained the majority of his leadership experience after these expeditions. In 1520 Diego Valásquez, governor of Cuba, ordered him to capture Hernán Cortés and take his place as the Governor of Mexico. De Narváez took an army of approximately 900 to the territory, but he was ultimately captured by Cortés and taken prisoner. He was set free the following year after Cortés received orders to release him. He returned to Cuba afterwards, where he began the process of planning an expedition to La Florida.

The Spanish crown granted de Narváez permission to conduct an expedition meant to capture and settle the territory of La Florida in 1526. After a year of preparation and enduring several setbacks, including a hurricane, he and his entrada of approximately 400 men landed near Tampa Bay in April of 1528. Soon after landing, he decided to split his men up. He took 300 of them on a journey over land while instructing the other 100 men to remain with the ships. De Narváez and his men struggled with the natives along their march inland. Meetings between the two parties often resulted in violent battles. By the end of July, the expedition reached the area near modern-day Tallahassee. At this point their supplies were extremely low, especially in the form of food, bringing the men to the brink of starvation. The members of the expedition left behind on the ships did not follow de Narváez and the overland forces up the coast, causing them to be effectively stranded with little supplies in a dangerous territory.

The men began building makeshift vessels (five in total) de Narváez wanted to use to reach Mexico. He split his forces between himself and his second-in-command, Álvar Núñez Cabeza de Vaca, and they set sail down the coastline of the Gulf of Mexico in September. The men endured harsh weather conditions and storms throughout the journey, which caused vessels to drift off and disappear along the way. In November, de Narváez himself disappeared and was never seen again. Ultimately, only four men survived the expedition and made it back to Mexico City.

Álvar Núñez Cabeza de Vaca was a Spanish explorer born ca.1488/90. He was born into Spanish nobility and eventually made a career for himself in the military. He was one of only four survivors of de Narváez’s expedition to La Florida. Additionally, his written narrative of the event is one of only two surviving accounts. He served as the treasurer and second-in-command of the expedition.

After de Narváez disappeared, de Vaca and his men continued in their attempts to make it back to Mexico on their makeshift boats. However, the storm that ultimately resulted in de Narváez’s demise (which was most likely a hurricane), swept them off track. They eventually reached land again near modern-day Galveston, Texas. There, they encountered a group of Native Americans that welcomed them into their culture. De Vaca and his comrades incorporated themselves into the culture throughout the course of the next four years. He worked as a trader and a healer. His role as healer became more important as several of the natives contracted an illness that we now know was smallpox. Smallpox took the lives of as much as 90 to 95 percent of Native Americans during the period of European exploration and settlement.

By the end of their four years living with the natives, only de Vaca and three other members of de Narváez’s initial entrada were still alive. In 1532 they decided to begin the journey inland, hoping to reach Mexico and return to their homelands. The group spent the next four years traveling throughout the modern-day American southwest by foot. Although a debate remains about exactly what route they took, historians believe that they traveled through modern-day Texas, New Mexico, Arizona, and northern Mexico. At last, de Vaca and the other survivors ran into Spanish slave traders near Culicán. The slave traders helped them return to Mexico City. De Vaca eventually returned to Spain, where he met Hernando de Soto and inspired the young conquistador’s own expedition of La Florida through his favorable depictions of the territory.