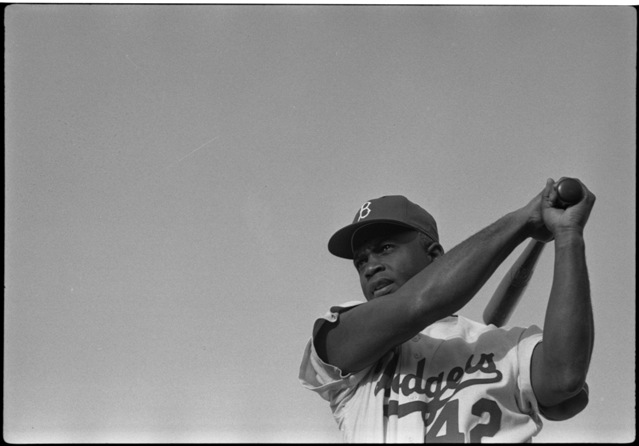 In January of 1919, former president Theodore (Teddy) Roosevelt passed away.  Although he could do little to change the  racism still deeply rooted in the South during his early 20th century presidency, he had earned the respect of many Southern black Americans by speaking out against racism and collaborating with Booker T. Washington on race issues.  His death struck a chord with a black sharecropper’s wife in a remote area of Georgia’s Wiregrass country, and she named her fifth child, in part at least, after the former US President.  Jack Roosevelt Robinson, destined to become a national hero, arrived into this world with no fanfare.  In fact, he was born to parents whose marriage was failing, to a people who found themselves in an economic system barely exceeding slavery, and to an environment that forbade the newborn to grow up on equal terms with any white children born that day.  It could not have happened any other way.

Jackie grew up in Pasadena, California with his three brothers and a sister.  His mother worked long, hard hours doing domestic duties for other families, and Jackie was often left in the care of his sister.  He occasionally caused trouble as a member of the Pepper Street gang, but through the positive influences of a minister and the example set by his mother and older brothers, Jackie grew into an upstanding citizen and a role model.  He excelled in all sports and the nation came to know him as a football star with UCLA long before knowing him for his talent on the baseball field.

The Army drafted Robinson in early 1942, and although Jackie had dealt with racial discrimination and insult before military service, it was here that he first witnessed how deeply engrained and institutionalized it was in American society and culture.  Here, too, Jackie found his voice in challenging these injustices.  Jackie and other black soldiers had to fight for the right to earn commissions as officers, although they were as qualified as white candidates.  At Ft. Hood, Lt. Robinson found himself facing a general court martial after refusing to move to the back of a military bus, which by official policy, should not have been segregated. 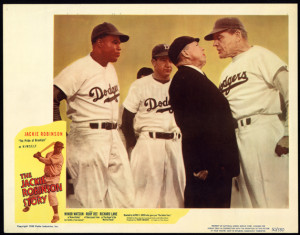 Following his discharge from the military, Jackie entered professional baseball, first with the Kansas City Monarchs of the Negro Leagues, and then, the Brooklyn Dodgers as the first black player in the Majors.  The historic move to the big leagues tested Jackie’s character as Dodger President Branch Rickey asked the rookie to  take the racial slurs and on-field attempts to injure him in poised silence, not something Jackie had been apt to do in the past.  He did so for the first few seasons.  Then, in 1949, Rickey agreed to remove the gag, and Jackie, with enormous popularity, spoke out against the injustices in baseball.

Jackie found in his voice in politics that same year when the House Un-American Activities Committee had him testify in response to Paul Robeson’s controversial remarks that black Americans would not fight against Russia if the US declared war with the Communist nation.  The public political life of Jackie Robinson had only just begun.  After his baseball career, he often wrote his concerns directly to the President of the United States – Kennedy, Johnson, and Nixon all received letters from him.  Martin Luther King, Jr. called on Jackie to assist in the rebuilding of African-American churches that had been burnt out of prejudice in Albany, Georgia.  Jackie played many other roles in the civil rights movement before his death of a heart attack in 1972.

Today, cities and states across the nation remember Jackie for his contributions to both civil rights and baseball.  He is remembered in Grady County, his birthplace, for being a shining example of how many black families living the harsh life of late nineteenth and early twentieth century Georgia overcame their reality and prepared their descendants for not only living actively in a segregated America, but also changing that America, no matter where in the United States they found themselves.  He is remembered in Albany, Georgia, for helping to ensure African-American churches were rebuilt in spite of the hatred that burned them down.  Atlanta remembers Jackie for playing baseball in a segregated Ponce de Leon Field despite the Klan’s warning that harm may come to him if he did so.  Jackie is as much a hero to Georgia as he is in any other state.