Just before his military discharge, a fellow African-American soldier told Jackie of a professional black baseball team called the Kansas City Monarchs. The pay, at $400 a month, was good, the soldier told him. It sounded like a fine opportunity, especially with few job prospects lined up for Jackie upon being discharged, and sports always seemed to have a place for him. Jackie probably could not predict that his career would lead to an end of racial segregation in Major League Baseball. 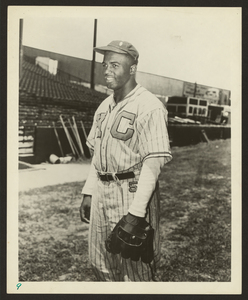 Soon after his release from the military, Jackie began playing for the Monarchs. Jackie quickly learned that life in the Negro Leagues presented a demoralizing set of unique challenges. Constant traveling throughout the Midwest became tiresome and good meals were hard to come by since most restaurants would not allow black patrons. Most hotels offered the same unfriendly “no” to the traveling black ball players. They often took their meals on the bus and slept while riding. The traveling hurt Jackie’s chances with Rachel as well. Being apart while in the military proved difficult enough, but now the long and frequent trips challenged her patience.

During the war, Brooklyn Dodger owner, Branch Rickey, set out to recruit not just white players, but, for the first time, black ball players as well. While other teams scaled back their recruiting efforts during the war period, Rickey saw the opportunity and actually increased the recruiting budget. Furthermore, many vocal activists and reporters had begun to call for the integration of baseball, so the time seemed to be fast approaching when teams would include African American players. Rickey told the Dodger board of directors that integrating baseball was the right thing to do, but not his top priority. His top priority was to win, and the untapped talent of black players could be key to a championship season. Recruiters scoured the nation and even Latin American countries for a candidate.

Rickey disguised his recruiting activity. He told reporters that the Dodgers planned to create a new Negro League called the United States League. The ruse worked; it kept the press coverage to a minimum and left Dodger rivals in the dark. In August of 1945, while Jackie was in Chicago, one of Rickey’s agents approached him and invited him to come speak with the Dodger owner. Rickey had not been looking for just a good ball player; this player had to have a special gift for surviving the injustices of racism while performing.

An extensive look into Jackie’s background showed his character. After a long talk about what Jackie would face – pitches thrown at his head, racial insults, and possible riots – and how Jackie would have to endure it without lashing out, terms were discussed and a contract agreed upon: $3500 bonus and $600 per month to play on the Dodger farm team, the Montreal Royals. Jackie could tell no one but Rachel and his mother.

Jackie and Rachel married in February 1946, and a few weeks later Rachel accompanied her new husband to spring training. The trip was full of what Jackie labeled “typical black experiences.” The color of the Robinson’s skin kept them from enjoying nice hotels and restaurants, bumped them from flights, and moved them to the back of the bus. The incidents foreshadowed experiences to come and proved to Jackie and Rachel that he commanded the will power to quietly take the injuries to his pride, although he wanted so much to strike out. Rickey told Robinson that he would have to absorb such discrimination on a regular basis and that reacting to it would only endanger the “noble experiment.” Jackie would have to prove himself on the field.

When they arrived in Sanford, Florida, near Daytona Beach, the hotel accommodating the Dodgers and their farm team counterparts refused to serve the Robinsons. They moved in with a prominent black couple, the Brocks, in the area, but on their second day there Rickey called and told them to leave as they were in danger of being run out by locals. They found another family in Daytona Beach where they found some peace. They moved in with Joe and Duff Harris. As a local black activist and politician, Joe had done much to encourage local businesses to treat the African-American community with more respect than nearby Sanford. Jackie and Rachel found the community more accepting, but Jackie could still not help feeling frustration.

His time on the field with the Royals went rather well. He eventually earned the respect of the manager, Clay Hopper, a Mississippi cotton plantation owner who initially rejected the idea of allowing a black player on his team. His teammates, though not overly friendly, were not hostile toward Jackie, and he earned more respect throughout the season through his game play and his iron will. Jim Crow reared his ugly head during early exhibition games, however, as many cities, including Savannah, Georgia, refused to play the Royals. Still, Jackie pushed on, and he led the Royals to the 1946 Little World Series Championship. Throughout the season, the Canadian fans supported him whole-heatedly. They booed the Louisville team during the championship series for treating Jackie horribly while in Louisville, and following the win, Royals fans chased Jackie’s car down the street. As Jackie recalled in his memoir, a sportswriter described the scene as “the only day in history that a black man ran from a white mob with love instead of lynching on its mind.” 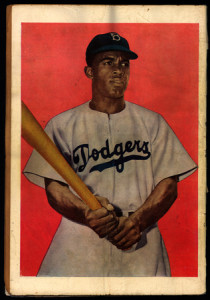 By the next season, numerous reporters, civil rights activists, and many of baseball’s most important people and players, including the commissioner A.B. “Happy” Chandler, supported the integration of professional baseball and thought Jackie should be the player to do it. Branch Rickey carried out a careful plan to introduce the rookie to the majors. In one interesting moment, he asked the Brooklyn African-American community, with the intent to have the word spread, that there should be no Jackie Robinson parades, days of commemoration, or even large welcoming committees shouting their support. Fearing a race riot and the end of the noble experiment should black supporters gather wherever Jackie played, Rickey told the group that the enemy most likely to ruin Robinson’s success “is the Negro people themselves.”

The crowd reacted angrily at first, but after further discussion, many opinions changed. Angry whites had been known to act violently in the face of black success, especially when, on those few occasions, a civil rights victory could be claimed. Many black Americans attended Jackie’s games, and the crowds were supportive. Behind the scenes though, black civic organizations and even Dodgers agents traveled to cities ahead of Jackie and planned how to handle his arrival and his stay while playing there. “Don’t ruin Jackie’s chances” became a slogan and “how to handle Jackie” clubs sprouted up in baseball cities around the nation.

Much has been written about Jackie’s professional baseball career. His challenges were many and great. He continued to find himself separated from the team at hotels and restaurants. Opposing teams continued to shout derogatory names at him and threatened to boycott any games in which he played. Angry baseball fans threatened him from the stands and through hate mail. Rachel endured much of it too as she watched from the stands and feared for her husband’s safety. Jackie quietly suffered bean balls thrown at his head, heckling from the umpires, and public hatred in the newspapers. Rickey told Jackie, as he told the group in Brooklyn, that a combination of humility and athleticism would speed the acceptance process. Jackie suffered a great deal of stress because of it, but he did it.

Jackie Robinson, the first black major leaguer, stepped on to the field April 15, 1947. His opener was not a stellar performance, and neither were many of his early games, but he quickly adapted. In his first year he knocked 12 pitches out of the park, led the National League in stolen bases, and was professional baseball’s rookie of the year. The Dodgers won the pennant and Jackie became a huge celebrity. As his fan base and popularity grew, and as his performance spoke for itself, Jackie came out of his quiet cocoon and began fighting back. After the first few seasons, Jackie began challenging umpires’ unfair calls and openly criticized the league leaders for allowing dangerous bean balls to be pitched at not only him, but also his teammates. He even went on public record regarding the heated relationship between him and manager Leo Durocher. His outspokenness did not detract from his popularity, and it was not long before Jackie began to endorse products for money just as the white players had been allowed to do.

A Major League Trip to Atlanta

In 1949, the year Jackie and Branch Rickey agreed to remove the restraints, a real threat of racial violence loomed on the horizon. Rickey saw public acceptance to integration and decided to increase the number of exhibition games in the South. A series against the Atlanta Crackers was planned for April, and some there were not happy about it.

The Crackers, who played at the segregated Ponce de Leon Park, were a successful and popular minor league team. Some believe that the term cracker, now typically seen as a derogatory term for poor white farmers or southerners, originated as a term for farmers in the field cracking their whips over teams of animals pulling farm implements. Whatever the origin, for the ball club it might as well have referred to the crack of their bats; the Crackers were good.

When the series was announced, the local Ku Klux Klan led by Dr. Samuel Green, warned the Dodgers that Robinson and another black player, Roy Campanella, could not play in Georgia. Interracial sports violated state laws, they said. And if it did not violate official state law, they thought, it certainly violated Jim Crow law. The KKK also threatened Jackie’s life, and many of his family and friends worried about what lay ahead. Branch Rickey, however, had another opinion. Jackie was sure to be mobbed, he said, but by autograph collectors and Robinson fans, not the Klan.

During their stay, the Klan picketed outside the Dodgers’ hotel. This certainly created unease among the players, and must have caused Jackie a great deal of stress. Once at the Ponce de Leon Field, however, it became clear that Rickey had been right. The Klan was there, but they were the minority. Autograph seekers hounded Jackie and the Dodgers, and on the last day of the series, April 10, attendance records were smashed as 25,000 people crammed into the 15,000 person capacity stadium. More than 13,000 black fans attended game three. The Dodgers won two of the three games and Jackie hit for an impressive .412 average.

Continue to Robinson and the Civil Rights Movement