Robinson and the Civil Rights Movement

Robinson and the Civil Rights Movement

Looking back at 1949, Jackie Robinson noted that when he began to protest his treatment on the field, he was labeled.  For a white player to speak up gave him character; a black man speaking out made him “uppity” and ungrateful for the opportunity given to him.  Black players played on other teams at that point, and for Jackie, it was time to be Jackie Robinson again.  Now he could show that he could give as well as take.  On one hand, it gave him the opportunity for a little revenge, but Robinson knew that smart, well-timed outbursts on the field and thought-out conversation and discussion off of it would eventually make it a better field for all players.  Nineteen forty-nine also gave him the opportunity to warm-up his voice on the political field after he received a request from Washington D.C.

In the summer of 1949, Georgia Representative and member of the House Un-American Activities Committee (HUAC), John Stephens Wood, sent a telegram to Jackie requesting that he speak before the committee regarding statements made by black civil rights activist, actor, and singer, Paul Robeson. The committee’s mission was to investigate Communist party members and threats within the United States. The ensuing investigations led to what is commonly seen as an unjustified witch hunt and led to the blacklisting of many Hollywood writers, directors, and actors and the public humiliation of countless others.

The committee often targeted black organizations believing them to be subversive and possibly Communist influenced. Some black individuals did support the idea of Communism, but as a way of achieving greater equality across the nation, not as a way to allow a Russian takeover. Robeson had visited Russia and wrote that he enjoyed a level of freedom there that black Americans never had. His visit and writings made him an easy target for the government. His Council on African Affairs (CAA), a group formed to lobby for African interests and support African interests, regularly denounced American foreign policy, especially policy regarding post World War II Europe such as the Marshall Plan. This increased government scrutiny of Robeson.

Although Robeson repeatedly stated that he was not a Communist, the committee believed differently. When Robeson made the statement that no black American would fight against Russia, the committee called on numerous black Americans to refute the statement, and, hence, the Wood telegram to Jackie. Jackie struggled with the decision to speak before the committee. Members of the HUAC, including Georgia Representative Wood, were known to be members of, or sympathizers with, the KKK. Jackie guessed at their real motives and, although he did not agree with Robeson, he did not like the idea of denouncing a fellow black American and activist who simply exercised his right to free speech. Further adding to his dilemma were letters from people all over the US stating that he would be traitor to his own people if he spoke out against Robeson.

With the support of Rachel and Branch Rickey, Robinson agreed to make a statement. He decided that his testimony would not condemn Robeson for his beliefs, but would only challenge the broad assumption that all black Americans would refuse to fight in a war against Russia. To the committee, Robinson stated that the issues of racial discrimination and Communist infiltration were being blurred together and hurting the progress of black Americans. The idea of “Communists stirring up Negroes to protest” caused only misunderstanding. Regarding Robeson’s statement, Jackie supported the activist’s right to speak his mind, but noted that no one, not even Jackie Robinson, could speak for the fifteen million African-Americans. He concluded his statement by saying that he, like many others black Americans, had too much invested in their families and in the future of the nation not to fight for it and that he believed it “silly” to assume no black citizen would answer the call if in fact a war broke out with any nation.

When asked for a response to Jackie’s statement, Robeson announced that he would not let the matter come to a personal feud between he and the Dodger star as that was exactly what the committee would want. It was the government, not his fellow African-Americans, Robeson held in contempt. Jackie never regretted his statements, and he came to hold Paul Robeson in high regard for his sacrifices. 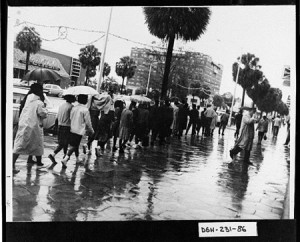 When he left baseball after the 1956 season, Jackie went to work for the Chock Full o’Nuts company, and he stayed active on the civil rights front. He worked with and was honored by the NAACP, and he regularly wrote letters of both praise and criticism to political figures including Presidents Kennedy, Johnson, and Nixon.

One of his last great impacts on Georgia, however, were his writings, speeches, and fundraising efforts to rebuild burned down churches in Albany, Georgia, during the waning months of the Albany Movement. The Albany Movement might be seen as a training ground for the better-known and more successful actions in Birmingham, Alabama, led by Martin Luther King. The Albany Movement began in late 1961 to unify local black citizens and in response to white opposition to the Student Nonviolent Coordinating Committee’s voter registration drive in the area. The movement launched meetings and marches and soon saw many of its members in jail. King, with his Southern Christian Leadership Conference (SCLC) sought to make the movement more successful and more visible in 1962.

Throughout 1962, anger among local whites grew. The local police chief, Laurie Pritchett, continued to jail demonstrators, using other county’s jails when necessary, and very rarely resorting to violence in front of the media. King, arrested once in December 1961, shortly after becoming involved, was arrested again in 1962. It seemed little would be done to change Albany.

White anger against the movement also led to clandestine activities to slow its momentum. Two black churches in Albany were burned because of their role in registering black voters. To help the congregations and to gain national attention, King asked Robinson to speak out against the racially motivated crimes and to lead a fund-raising drive to rebuild the churches. Jackie quickly agreed, spoke at a rally in Albany, and visited the site of the burned-out Mount Olive Baptist Church in Sasser, Georgia (an interesting location given that he had been born on the Sasser Plantation a mere seventy miles away).

Robinson’s fame and connections rebuilt three churches (a third church in Lee County was also part of the drive). Jackie had come to know and respect New York Governor Nelson Rockefeller. The governor, a Baptist layman, contributed $10,000 within weeks of Jackie’s calls for assistance. Jackie also received money from his boss at Chock Full o’Nuts, William Black. It took two years, but the drive raised the necessary $50,000 to rebuild the churches.