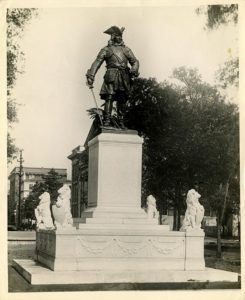 Eleanor and Theophilus Oglethorpe welcomed their 10th and last child, James Edward, into the world on December 22, 1696. Oglethorpe grew up in a well-connected, wealthy English family with controversial ties to the Jacobite movement.

In 1714, Oglethorpe entered Corpus Christi College at Oxford University where he attended on and off until joining a military academy in Paris and joining the army of Prince Eugene of Savoy during the Austro-Turkish War of 1716-1718. Oglethorpe successfully ran for Parliament in 1722, winning the Haslemere seat held previously by his father and two older brothers.

Oglethorpe earned a reputation as a reformer early in his parliamentary career. He actively lobbied for reforms in the areas of naval conscription, prisons, and city planning. He belonged to a group of like-minded men who envisioned a new colony—Georgia—as a haven for England’s worthy poor. They drafted a charter for the thirteenth colony in British North America that offered a cure to the strict class divisions that plagued English society; there would be no slavery and no large landholdings. In fact, the original Trustees (including Oglethorpe) did not earn a salary and could not hold office or own land in the new colony.

Oglethorpe volunteered to lead the first group of colonists to Georgia in 1732. The ship Ann arrived at Yamacraw Bluff on February 12, 1733*. Although he held no official title, Oglethorpe acted as the colony’s de facto governor. He returned to England in 1734 to raise money for the fledgling colony and subsequently made several trips back and forth, including a voyage in 1736 in which he accompanied John and Charles Wesley. His longest residence in Georgia was from 1738-1743 when he was concerned with fighting the Spanish. 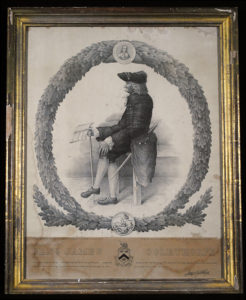 In 1743, Oglethorpe left Georgia for the last time. Shortly after his return to England, Oglethorpe married Elizabeth Wright, heir to the Essex estate of Cranham. He continued to serve in Parliament until 1754 and served in a brief military campaign during the 1745 Jacobite uprising. He also secretly served a brief time under his friend Field Marshal James Keith in the Seven Years’ War.

Oglethorpe retired from political and military life to live quietly with his wife and friends. In June 1785, Oglethorpe met with John Adams, the first U.S. Ambassador to Great Britain. During their friendly encounter, Oglethorpe expressed high regard for America. Just days later, Oglethorpe fell ill and on June 30, 1785, he died peacefully at the age of 88. He was buried under the chancel of All Saints’ Parish Church in Cranham. His wife Elizabeth died two years later and was buried beside him.

*Date in “New Style.” In 1752, England changed its calendar to the Gregorian Calendar and eleven days were dropped from the month September 1752. In the “Old Style” Georgia’s founding date is February 01, 1733. For more information see the CT State Library Colonial Records & Topics LibGuide.