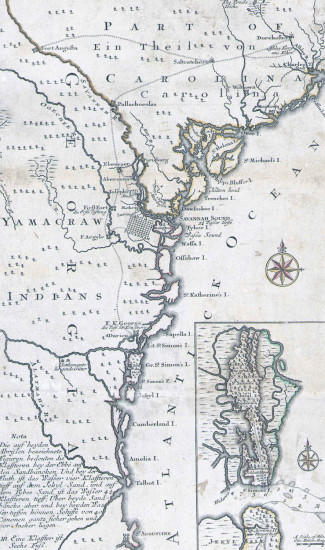 Ebenezer
Oglethorpe founded or oversaw the founding of several other communities in the new colony of Georgia after his first planned city of Savannah. A group of Germans from Salzburg traveled in Georgia to escape Catholic persecution. Oglethorpe sent them to settle a community called Ebenezer, and the Salzburgers, as they were known, became known as hard-working and self-reliant colonists.

Fort Frederica
Around the same time the Salzburgers were settling Ebenezer, Oglethorpe was setting his sights on St. Simons Island. St. Simons is near the Georgia-Florida border, actually to the south of the Altamaha River, the original southern border of the Georgia colony. This would prove to be a touchy subject with the Spanish in Florida, but Oglethorpe was determined to build a fort there. Upon arrival, Oglethorpe immediately began laying out the new community, which he decided to name Fort Frederica. He found a field overlooking a river and the marsh on one side, and shielded from view with trees on another side. The new fort would have an excellent advantage over any hostile forces that tried to approach it, and this location proved successful in the Battle of Bloody Marsh against the Spanish.

Darien
While Oglethorpe made his first trip back to England in 1734, a group of Scottish Highlanders had arrived in Georgia and traveled south to settle their own community. They had been recruited to populate this area, at the time the southernmost settlement in the colony and the most at-risk due to the proximity to Florida, because of their ability to fight and survive. The Highlanders called their town Darien, and a few years after settling they would be integral in eliminating the Spanish as a threat to the British colonies. Oglethorpe was pleased and impressed with the Scottish colonists, and would often wear a kilt and other Scottish attire to show his pride and respect.

Brunswick
Oglethorpe would also aid in the founding of Brunswick, a port city to the south of Savannah and near St. Simons. Brunswick was first settled by a member of Oglethorpe’s regiment that he received from King George II on one of his return trips to England. Brunswick was called Carr’s Fields after Captain Mark Carr, and later was renamed Brunswick for the British royal family. Other communities were founded while Oglethorpe was in Georgia, including Fort Augusta, which would then become the city of Augusta.

In 1873, the Georgia Historical Society published a collection of letters from James Oglethorpe to the Trustees covering the period from October 29th, 1735 to August 24th, 1744. GHS obtained copies of the letters from the British Colonial Office. The letters contain letters from Oglethorpe concerning many of the communities he helped settled. Below is an excerpt concerning the establishment of Darien. Read all the letters in Collections of the Georgia Historical Society, Volume III.

“On the 22d a boat arrived with a Detachment of the Workmen (t the same day I left St. Simon rowmg up the Alatamaha 3 hours I arrived at y” Scotch Settlement which they desire may be called Darien. They were all under Ai’ms upon seeing a Boat, and made a most manly appearance with their Plads, broad Swords, Targets & Fire Arms, the latter of which were very bad, of which the person who furnished them should be informed. Some of the Carolina People on their first landing near Savannah strove to discourage them by saying that the Spaniards would shoot them as they stood upon the ground where we placed them from the houses in their Fort. Why then said the Highland men we will beat them out of then- Fort & shall have Houses ready built to live in. They have mounted a Battery of 4 pieces of Cannon, built a Guard house a Store house a Chappel & several Hutts for particular people & one of their men dying, the whole people joyned & they built a house for his widdow. Mr. Hugh Mackay who commands there has shown himself an excellent Officer, in all the Dispositions which he has made, and deserves the thanks of the Trustees & also that they should speak for the continuance of his leave of absence & obtain Commission for him to sell.”