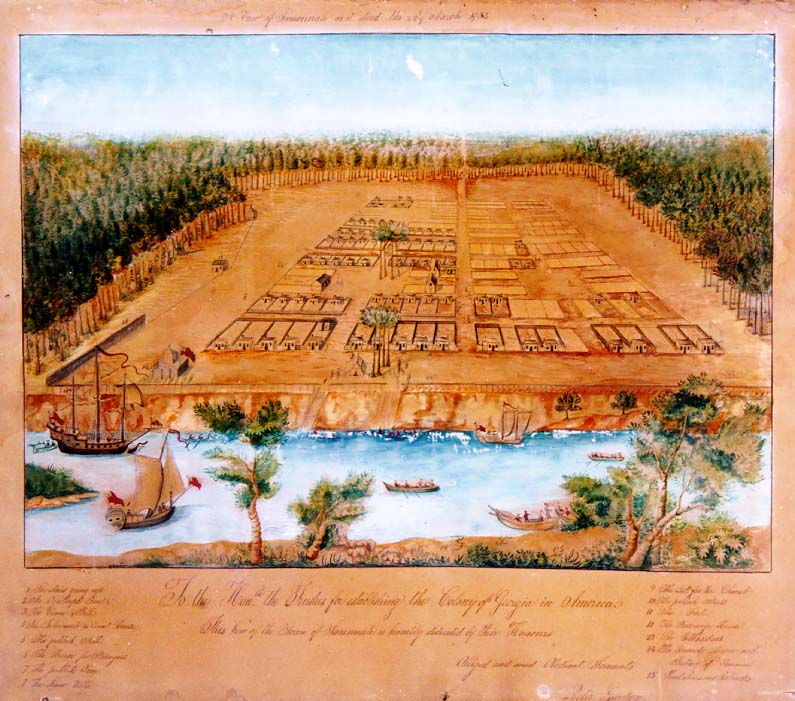 The historical record is not entirely clear on who designed Savannah’s city plan and what inspired it, but it is clear that Oglethorpe led the effort to take the design from plan to reality.

The plan was important militarily because it would make the city easier to defend from the Spanish to the south and against potentially hostile Indians. Oglethorpe laid out the city around a series of squares and laid out the streets in a grid pattern. Each square had a small community of colonists living around it and had separate lots dedicated to community buildings.

For each of the freemen who came to settle the new colony, Oglethorpe awarded 50 acres of land. This included a house lot in the city of Savannah, a five-acre garden lot outside of the city, and a 45-acre farm lot beyond the garden lots. The colonists usually lived on the city lot, thereby taking advantage of the safety of the city, and they worked their garden and farm lots for food and other resources.

Noble Jones was the first surveyor in the new colony and helped Oglethorpe fulfill his dream of a planned city. Oglethorpe also worked with Colonel William Bull to lay out the new city. Bull came from South Carolina and served as the city’s first architect, overseeing the design and construction of the earliest buildings. These early structures were all the same and were very basic single-story clapboard homes, 24×16 feet in size with a loft above and a small yard in the back.

Oglethorpe and Bull originally laid out four wards in two rows along the Savannah River. The wards were directly correlated with the garden and farm lots located outside of the city, so communities were kept together both inside and outside of the city. Each ward centered on a square and had four tythings on the north and south sides of the square. Tythings were rows of house lots, ten lots long. On the east and west sides of the square, there were trust lots used for public buildings such as churches or the courthouse. Today Savannah is one of the largest urban historic districts in the United States, and most of Oglethorpe’s original plan remains.

Oglethorpe only laid out the first six squares, but city leaders followed the design for decades after he returned to England. The city grew to include twenty-four squares. Today, Savannah includes twenty-two of the original squares. Ebenezer was also laid out with four squares and wards, and in 1736 Oglethorpe set up New Inverness, also known as Darien, near St. Simons Island with one square and surrounding blocks of homes. Oglethorpe’s city planning influence went on for a time after he returned to England, with three other coastal Georgia towns, including Brunswick, using the Savannah plan as a starting point.

Scholars and historians debate what inspired the design for Savannah’s innovative city plan, but it is clear that James Edward Oglethorpe laid out the city’s first four squares. Uniquely, Savannah kept using the original city plan long after the Trustees stopped managing the colony. In fact, city planners laid out new squares based on the original plan until the 1850s. Today, twenty-two of the original twenty-four Savannah squares exist. Explore the gallery of maps below for a visual representation of the savannah plan over time.

Continue to Oglethorpe and Tomochichi