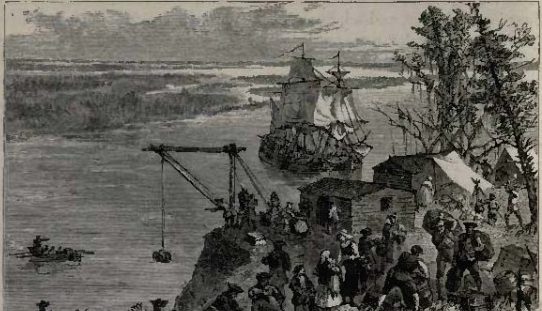 Detail from Landing at Savannah in Scribner’s Popular History of the United States, Volume III by William Bryant, 1897.

On November 17, 1732, James Edward Oglethorpe and approximately 114 passengers left Gravesend, England, for Georgia on the frigate Anne. When the colonists set off, there was no one from debtor’s prison on board—despite what most believe about the colonists who first settled Georgia.

It took the Anne two months to travel from England to America. They stopped first in Charleston, South Carolina, and then proceeded further south to Port Royal, South Carolina. Here the colonists waited while Oglethorpe ventured ahead with Carolina Rangers to pinpoint the spot where they would settle. They traveled all this way without knowing exactly where they would be living! However, it did not take Oglethorpe too long to locate Yamacraw Bluff, a stretch of land one mile long overlooking the Savannah River. By February 12*, Oglethorpe had gathered all of the colonists at Yamacraw Bluff, and the group set about creating temporary shelters and laying out the new city. 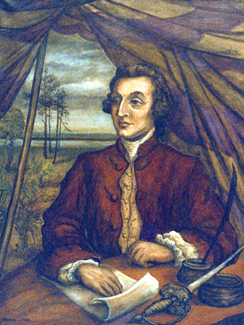 Portrait of James Edward Oglethorpe by Raiford J. Wood. Circa 1955. From the Georgia Historical Society Object Collection, A-1361-600.

Oglethorpe imagined the Georgia colony to be an ideal agrarian society; he opposed slavery and allowed people of all religions to settle in Savannah even though the charter stated that Catholics and Jewish people were not allowed. Oglethorpe defied this provision of the charter and allowed a group of Jewish people to settle in Savannah during the summer of 1733. In addition to his religious tolerance, Oglethorpe worked with and respected the local Indian tribes. He established a relationship with the Yamacraw Creeks, protecting them from traders who wanted to take advantage of them and settling land disputes with treaties.

Oglethorpe also established a ten-acre garden to the east of the city called Trustee’s Garden. The experimental garden belonged to the Trustees of the colony and was modeled after medicinal and botanical gardens in England. This garden would have plants to be used in medicines and plants for raw materials to make luxury goods, such as mulberry trees to feed the silkworms that the Trustees hoped would thrive in Georiga. Oglethorpe also grew orange trees, apple trees, pear tree, olives, figs, pomegranates, and other fruits that grew well in the warm climate.

But the early days of the colony were soon overshadowed by the threat from the Spanish. Oglethorpe found himself thinking more and more about how he could protect the citizens of the colony from an invasion from the Spanish. He repeatedly asked Parliament and the Trustees back in England for more resources to protect the colony. Often Parliament and the Trustees didn’t provide enough money and resources, and Oglethorpe used his own money to provide everything the colony needed. He knew he could lose everything if the colony didn’t succeed, but he had confidence in the final outcome.

In 1737, on a trip to England, Oglethorpe persuaded King George to make him a colonel in the British army and give him a regiment of soldiers to bring back to Savannah. Oglethorpe had minimal military experience, but he got what he wanted and found himself in charge of protecting not only Georgia but also South Carolina against the Spanish forces to the south.

Letter from James Edward Oglethorpe to the Trustees. February 22, 1733.*

The whole people arrived on the first of February. At night their tents were got up. ‘Till the 7th we were taken up in unloading and making a crane, which I even then could not get finished so took off the hands and set some of the fortification and begun to fell the woods. I marked out the town and common. Half of the former is already cleared, and the first house was begun yesterday in the afternoon.

An Account of the First Settling of the Colony of Georgia with a Journal of the First Embarkation Under the Direction of Mr. Oglethorpe by Peter Gordon.

March ye 1st, The first House in the Square was framed, and raised, Mr. Oglethorpdriving the first pinn [pin]. Before this we hade [had] proceeded in a very unSetled [unSettled] manner, having been imployed [employed] in Severall [Several] Different things Such as Cuting[Cutting] Down Trees, and Cross cutting them to proper lengths for Clapp [Clap] Boards and afterwards splitting Them into Clapp [Clap] Boards in order to Build us Clapp [Clap] Board Houses, which was the first design, but that not answering the expectation. We were now divided into Different Gangs. And Each Gang had Their Their proper Labour [Labor] assign’d [assigned] to Them. And to be under The Direction, of one persone [person] of Each Gang So that we proceeded in our Labour [Labor] much more regular Thane [Than] before…”

Sunday the fourth, after divine Service, we were ordered under Arms. And the Tythings [Tithings] marched regularly into the Wood, A Small Distance from the Town, Where Mr. Oglethorp, Ordered a Mark to [added: be] fixed up. At a Hundred Yards distance to be Shott [Shot] at by all the Men, And who ever Shott [Shot] nearest The mark to have a Small Prize of Seven or Eight Shillings Value, This Custome [Custom] which was intended to train the People up to firing, and to make them good marksman, was generally observed, for many Sundays afterwards. That being the only day we could be possibly Spared from Labour [Labor], And with some Success.

*Date in “New Style.” In 1752, England changed its calendar to the Gregorian Calendar and eleven days were dropped from the month September 1752. In the “Old Style” Georgia’s founding date is February 01, 1733. For more information see the CT State Library Colonial Records & Topics LibGuide.