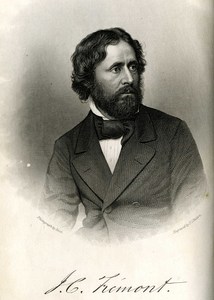 John Charles Frémont was born in Savannah Georgia on January 21, 1813 to French Émigré Charles Frémont and Virginia native Anne Pryor. Frémont is best known as the “Pathfinder” because of his daring and successful expeditions on the western frontier. In addition to his accomplishments as explorer, surveyor, and map-maker, John Charles Frémont was also a two time Republican presidential candidate, California Senator, millionaire, U.S. Army General, and governor of the Arizona territory.

After his birth in Savannah, his family traveled throughout the South eventually settling in Charleston, South Carolina after his father’s death. After attending but not graduating from the College of Charleston, Frémont spent time as a navigational mathematics instructor on a U.S. Navy ship. Frémont’s journeys transitioned from sea to land as his mentor and Secretary of War Joel Poinsett opened the door for Frémont to begin his career as a surveyor for the U.S. Army Corps Bureau of Topographical Engineers. From 1838-1839 Frémont assisted renowned scientist Joseph Nicollet in surveying the Upper Mississippi and Missouri Rivers. Frémont’s three successful Western expeditions in the 1840s, including his famous winter crossing of the Sierra Nevada to California, catapulted him to national fame, further opened the west for settlement, and aided in California’s independence from Mexico.

Frémont struck gold making millions during the California gold rush and held a short tenure as a Senator from California. Frémont’s anti-slavery sentiments and strong belief in Unionism led him to win the first Republican nomination for the presidency. During the Civil War, Frémont was an unsuccessful general with a strained relationship to President Lincoln. After the war, Frémont stepped out of the limelight working on railroad projects and eventually taking an appointment as governor of the Arizona territories. Sadly, Frémont lost his fortune and died a poor man in New York City in 1890. Frémont’s legacy remains drawn into the map of the United States of America.