Frémont had plenty of experience leading men through dangerous circumstances. During the Civil War, Frémont had to put that experience to use leading men in battle as a Major General for the United States Army. Through the help of some very influential connections, Frémont was given command over the newly created Department of the West in 1861. His time as a Major General was marked with tension and controversy and ended with Frémont’s resignation from the United States Army in 1862.

Department of the West 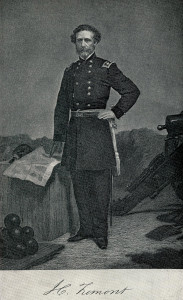 Dellenbaugh, Frederick Samuel. Frémont and ’49; the story of a remarkable career and its relation to the exploration and development of our western territory, especially of California. Georgia Historical Society Main Collection.

On August 30, 1861, Frémont made a decision that would start a chain of events leading to his resigning from the military. On that day, Frémont made a proclamation to institute martial law and execute any Confederate guerrilla fighter captured behind Union lines. The proclamation also called for the confiscation of the property of Confederate sympathizers in Missouri and the freeing of all slaves owned by Confederate sympathizers in Missouri.

President Lincoln did not fully agree with the proclamation and tried to gently change Frémont’s mind and avoid firing him from his post. Frémont did not easily back down from his position. Lincoln sent Postmaster General Montgomery Blair and Army Quartermaster General M.C. Meigs to St. Louis to check-up on Frémont and explain the president’s position. Blair and Meigs were not happy with their meeting with Frémont and they, along with others, began to question Frémont’s ability to command. In November of 1861, President Lincoln took Frémont off command of the Department of the West.

My dear Sir: — Two points in your proclamation of August 30 give me some anxiety.

First. Should you shoot a man, according to the proclamation, the Confederates would very certainly shoot our best men in their hands in retaliation; and so, man for man, indefinitely. It is, therefore, my order that you allow no man to be shot under the proclamation without first having my approbation or consent.

Second. I think there is great danger that the closing paragraph, in relation to the confiscation of property and the liberating slaves of traitorous owners, will alarm our Southern Union friends and turn them against us; perhaps ruin our rather fair prospect for Kentucky. Allow me, therefore, to ask that you will, as of your own motion, modify that paragraph so as to conform to the first and fourth sections of the act of Congress entitled “An act to confiscate property used for insurrectionary purposes,’ approved August 6, 1861, and a copy of which act I herewith send you.

This letter is written in a spirit of caution, and not of censure. I send it by special messenger, in order that it may certainly and speedily reach you.

In the spring of 1862, Frémont was formally cleared of any charges of misconduct and assigned to command the Mountain Department. Frémont did not have much success in his new command. Confederate General Thomas J. “Stonewall” Jackson bested him at every turn. President Lincoln offered Frémont a lesser role as a division commander. Frémont refused to take the position because it was basically a demotion. Instead, Frémont resigned from the military. 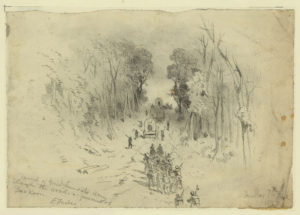 March of Genl. Fremont’s army through the woods in pursuit of Jackson.

Frémont ran for president again in 1864 as a Radical Republican. Although the August 30th proclamation cost him his command, it made him very popular with the Radical Republicans. Radical Republicans saw Lincoln’s approach to the Civil War as too weak and supported Frémont’s staunch anti-slavery sentiments. Frémont withdrew from the campaign on September 22, 1864, at the urging of Republicans who feared a split ticket would lead to the victory of Democratic candidate George B. McClellan.

Continue to Death and Legacy