Although at various points in his life John C. Frémont experienced great wealth, he was not born into a life of wealth and privilege. The circumstances surrounding Frémont’s birth and childhood may not be what you would expect for a man who would become a presidential candidate and one of the most famous personalities of the 19th century. In fact, some of the more shocking details about his birth would later be used by his opponents in the 1856 presidential election to try and persuade voters that he was not suited for the job. Studying Frémont’s early life brings forward two important facts themes from his life. First, Frémont was guided by several great mentors. Second, although Frémont did not always act like a star student, he loved reading and learning.

From Savannah to Charleston 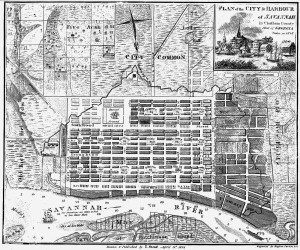 Plan of the City of the City & Harbour of Savannah in Chatham County state of Georgia, taken in 1818. Georgia Historical Society Map Collection, 1361MP – 006

John C. Frémont was born in Savannah, Georgia, on January 21, 1813. His parents were Charles Fremon and Anne Pryor. Charles Fremon was a French émigré. An émigré is someone who moves from their own country to live in another for political reasons. Thousands of Frenchmen like Charles Fremon left France in the 1790s during the French Revolution.

When Charles Fremon and Anne Pryor met in Virginia, Anne was already married. When Anne’s husband found out about their relationship, she and Charles left Virginia and eventually came to Savannah, Georgia where they had their first child, John C. Frémont.

Frémont had two younger siblings, Elizabeth and Frank. The family traveled a lot when Frémont was very young. His sister Elizabeth was born in Nashville, Tennessee and his brother Frank was born in Norfolk, Virginia. Sadly, Frémont’s father died in 1817. After his death, Anne took her three children to Charleston, South Carolina.

Why does John Frémont spell his name differently from his father? John Frémont used to spell his name Fremon until his mentor Joseph N. Nicollet, a famous French explorer, encouraged Frémont to embrace his French ancestry. Immigrants often changed the spelling or pronunciation of their name when they came to America. Some immigrants thought it would help them fit in better or find a good job. We do not know exactly why Charles Fremon changed the spelling of his name.

The highlighted section of this December 10, 1812 newspaper advertisement was submitted by C. Fremon, John C. Frémont’s father. Click on the newspaper to see a larger copy. 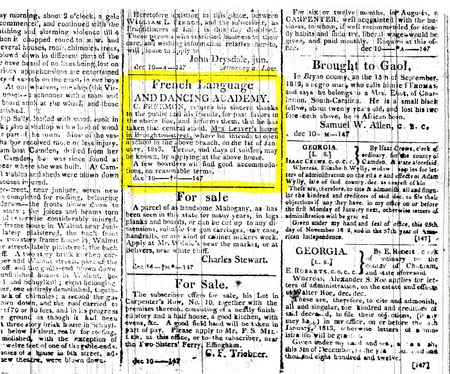 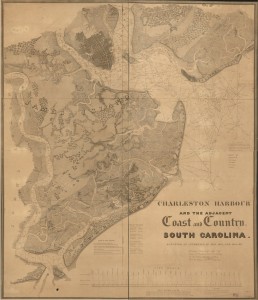 Throughout his life, Frémont had several mentors who helped him become successful. One of these mentors was a lawyer in Charleston named John Mitchell. Frémont did such a good job as his clerk that Mitchell decided to pay for his tuition to study at a local preparatory school run by John Robertson. Frémont was about thirteen years old when he began his formal schooling. Frémont enjoyed his studies. He learned Greek and Latin and read books like The Odyssey by Homer in their original language. The study of ancient languages like Greek and Latin and the literature and history from ancient civilizations is called Classics. 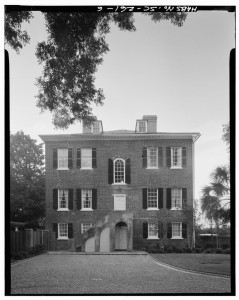 In 1830, Frémont lost focus on his studies. He often skipped school to explore the outdoors. In his Memoirs, Frémont explains those early adventures: “In the summer we ranged about in the woods, or on the now historic islands, gunning or picnicking…” After skipping one too many days of class, Frémont was expelled from the College of Charleston. However, Frémont did not lose his love of reading and learning just because he was not in a classroom.

Schooling has changed a lot since John C. Frémont was a student. When Frémont started at the preparatory school in the 1820s, there was no official government-sponsored public school system. The type of education you received often depended on your family’s occupation and status and was different from state to state and even town to town. Some communities built schools and paid for teachers, wealthy families often hired tutors to teacher their children, and people like Frémont ‘s teacher John Robertson opened their own schools and charged tuition. Some children never attended school. It was not until 1866 that the Georgia Assembly created the first organized public education system in Georgia.

In this quote from his Memoirs, Frémont talks about two books that changed his life.

The accidents that lead to events are often hardly noticeable. A single book sometimes enters fruitfully into character or pursuit. I had two such. One was a chronicle of men who had made themselves famous by brave and noble deeds, or infamous by cruel and base acts. With a schoolboy’s enthusiasm I read these stories over and over again, with alternate pleasure or indignation. I please myself in thinking they have sometimes exercised a restraining or inspiring influence. Dwelling in the memory they were like the ring of Amasis.

The other was a work on practical astronomy, published in the Dutch. The language made it a closed book but for the beautifully clear maps of the stars and many examples of astronomical calculations. By its aid I became well acquainted with the night skies and familiarized myself with the ordinary observations necessary to determine latitude and longitude. This was the beginning of the astronomical knowledge afterwards so essential to me. 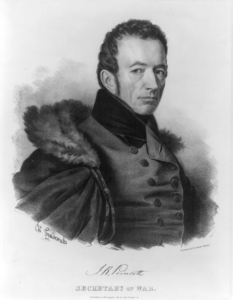 Around the time he was expelled from the College of Charleston, another important mentor came into Frémont’s life: Joel Poinsett. Poinsett was a well-known physician, diplomat, and politician. He helped shape Frémont’s opinions on politics and helped give him important career opportunities. Poinsett disliked slavery, had a love of the Union, and a wish to see the United States expand its territory in the west. Soon Frémont came to share these same opinions.

At age twenty-two, Frémont got a job as a mathematics teacher aboard a U.S. Navy ship sailing to South America. The U.S. Navy did not have the same methods for training their sailors as they do today, and it was Frémont’s job to teach the sailors how to use mathematics to successfully navigate on open waters. This was Frémont’s only adventure by sea; he would soon start his career as an explorer by land.

In this quote from his Memoirs, Frémont talks about the important role of mentors in his life.

Throughout, at different periods it has been my good fortune to be in familiar relations with men who were eminent, each in his own line, all of whom were individualized by character and some distinguished by achievement. Even if insensibly, such associations influence the course of life and give its coloring to it. The early part of mine was desultory. “The path that men are destined to walk ” had not been marked out for me. Later events determined this, and meantime I had freedom of choice in preparatory studies.