Between 1845 and 1853, Frémont lead three western expeditions. On his third expedition, Frémont and his men became involved in the Bear Flag revolt and participated in the conflict between Mexico and the United States. For a short time Frémont was Governor of the newly formed California Territories, but conflict with General Robert Stockton ended badly for Frémont. Tragedy and failure marked Frémont’s fourth and fifth expeditions but brought Frémont great wealth in the California gold rush. 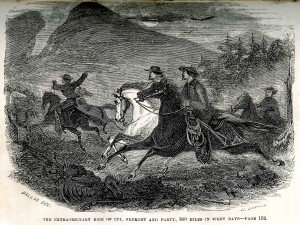 For his third expedition, Frémont was assigned to survey watersheds of rivers draining from the Rockies. Just like in his second expedition, Frémont did not follow orders exactly as written. As Frémont prepared for his third expedition, tensions were growing between Mexico and the United States. In March of 1844, the United States Congress passed a joint resolution to admit Texas as a state. Before the exploring party left St. Louis on June 4, 1845, Frémont was told to enter Mexican territory only if it was necessary for his survey. Yet in early 1846 Frémont took his exploring party into California and got himself and his men involved in the Bear Flag revolt. On July 23, 1846, Frémont and his men became official members of the U.S. Army under General Robert Stockton. On January 13, 1847, without official permission, Frémont signed the Treaty of Cahuenga which ended the hostilities between the United States and the Californios. 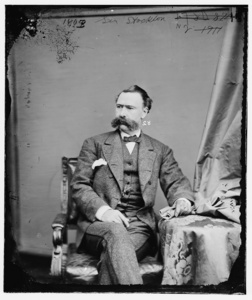 Commodore Robert Stockton gave Frémont the order to act as Governor of the Territory of California in 1847 but General Stephen Watts Kearny thought he had the true right to hold that office. Kearny and Frémont struggled for control. In May of 1847 Frémont disbanded his California Battalion and followed Kearny’s army back east to face investigation by Court Martial. Frémont was found guilty on all charges and dismissed from the army. President Polk offered him a full reinstatement but Frémont refused. He would not rejoin the military until 1861 when he was made Major General in charge of the Department of the West.

In 1848, Frémont published his official report from the Third Expedition titled Geographic Memoir upon Upper California in Illustration of His Map of Oregon and California. He wrote the report at the same time he was preparing for his Court Martial. Frémont was under a lot of stress and had a hard time focusing on his report. To top it off, Jessie was pregnant with their second child and could not give him as much help as she did for his first two reports. The report was shorter than his two previous reports and did not include as many harrowing tales of adventure or practical advice for emigrants. The report was still important because it gave the public a more detailed description of California. 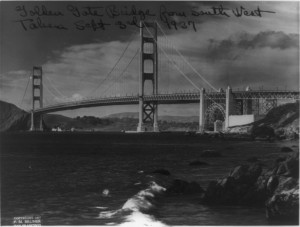 Did you know that Frémont gave the entrance to the San Francisco Bay the name “Golden Gate” in his Geographic Memoir? The name was later given to the famous Golden Gate Bridge which crosses the Golden Gate Reservoir and connects San Francisco to counties in Northern California. Construction of the bridge lasted from 1933 to 1937.

In this selection from his Memoirs, Frémont recalls the moment when his third expedition changed from peaceful to militant.

I saw the way opening clear before me. War with Mexico was inevitable ; and a grand opportunity now presented itself to realize in their fullest extent the far-sighted views of Senator Benton, and make the Pacific Ocean the western boundary of the United States. I resolved to move forward on the opportunity and return forthwith to the Sacramento valley in order to bring to bear all the influences I could command.

Except myself, then and for nine months afterward, there was no other officer of the army in California. The citizen party under my command was made up of picked men, and although small in number, constituted a formidable nucleus for frontier warfare, and many of its members commanded the confidence of the emigration.

This decision was the first step in the conquest of California. 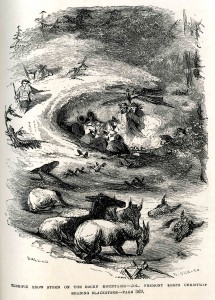 On October 21, 1848, Frémont and thirty-five men left Westport, Kansas, to find a safe winter crossing across the Rockies to California. Senator Benton got a group of St. Louis businessmen to fund the expedition in hopes that it would help convince Congress to support a rail line from St. Louis to San Francisco, also known as the thirty-eighth-parallel line. The snow, ice, and cold temperatures proved a terrible enemy for the exploring party. By the end of the expedition ten of the original explorers had died of starvation and hypothermia.

After he returned, Frémont put the difficulties of his fourth expedition behind him to mine gold on his ranch in California. The Frémonts became wealthy from the gold found on Las Mariposas (their property in California) and the investments made with that gold. Frémont settled into the life of a wealthy business man and traveled often to check on all the business he started with his new money.

Did you know that the California Gold Rush began in January of 1848 when a work crew building a saw mill near Sacramento discovered a few small nuggets of gold? As word got out that there was gold in California, thousands of people started migrating to the territory in search of wealth. California’s population increased dramatically. The town of San Francisco grew from a population of 1,000 to 20,000 in only two years. Workers from all over the world, especially China, also came to California, making it the most ethnically diverse state in the United States at that time.

In 1853, Frémont set out for one last expedition. The goal was the same as the fourth expedition, to make a safe winter crossing of the Rockies to prove that a rail line could be safely built on the thirty-eighth parallel. Once again, the winter weather was very hard on the expedition party. Despite the difficulties, only one member of the party died on the long journey. In the end, no thirty-eighth-parallel line was ever built. 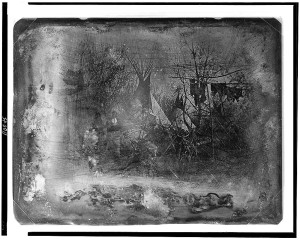 Frémont hired a photographer to join his fifth and last expedition. The photographer’s name was Solomon Nunes Carvalho. Carvalho used daguerreotype equipment to take photographs to document the expedition. This was the very first exploring expedition to be documented with photographs. Unfortunately, the plates made on the expedition were destroyed in a warehouse fire. Many of the images had been turned into engravings which were later published in Frémont’s memoirs.