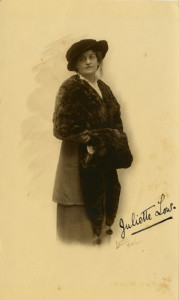 Known as “Daisy” to her friends and family, Juliette Magill Kinzie Gordon Low was born in Savannah, Georgia, on October 31, 1860.  She was born into an influential and wealthy family on both her mother and father’s side. Juliette Gordon Low grew up in the typical fashion of an elite southern family. As a young teenager, she attended boarding school at the Virginia Female Institute in Staunton, VA (now Stuart Hall), Edge Hill School outside Charlottesville, VA, Miss Emmett’s school in Morristown, NJ, and finally Mesdemoiselles Charbonniers, a French finishing school in New York City.

Although her upbringing was typical of a girl of her station, those who knew Juliette Gordon Low would not describe her as “typical.” Her brother Arthur summed his sister up well, calling her a brilliant eccentric. She had a great love for pets, especially exotic birds and could often be seen with one perched on her shoulder. From childhood on Juliette Gordon Low was very athletic. One of her favorite skills was standing on her head which she would famously do later at the National Headquarters of the Girl Scouts to show off the new uniform shoes. She also struggled with deafness caused by mistreatment of chronic ear infections and an accident in 1886. 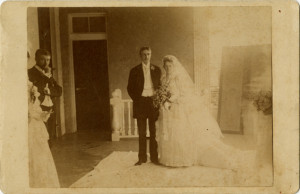 At the age of twenty-six, Juliette Gordon Low married William Mackay Low, a wealthy Englishman, on December 21, 1886. Juliette and William had no children and spent much of their time apart. In 1902 William Mackay Low left Juliette for another woman. Their divorce proceedings were still underway at the time of his sudden death in 1905. William left most of his estate to his mistress, but Juliette Gordon Low successfully contested the will and won a large settlement, including William’s property in Georgia.

The next important phase in Juliette’s life began in the summer of 1911 when Sir Robert Baden-Powell, the founder of the Boy Scouts, asked Low to aid in the fledgling Girl Guides movement in Great Britain. Juliette Gordon Low personally invited the girls living near her Scotland estate to join in weekly meetings. Low started more Girl Guide companies in London before returning to Savannah in 1912 to start the Girl Guides movement in the United States. On March 12, 1912, the original eighteen girls registered as the first troop of American Girl Guides. A year later the Girl Guides name was officially changed to Girl Scouts. 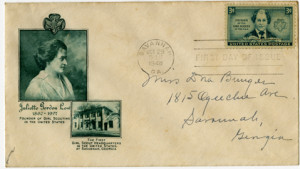 Low spent the next 14 years of her life devoting her energy, enthusiasm, and wealth to the Girl Scout cause in the United States and around the world. On January 17, 1927, Juliette Gordon Low lost a battle with cancer and died at her Lafayette Square home in Savannah.  By the time of her death, the Girl Scout movement had grown from the original eighteen girls to 168,000 members. Low was buried in Laurel Grove Cemetery wearing her Girl Scout uniform. Tucked in her pocket was a telegram from the national officers of the Girl Scouts USA that read, “You are not only the first Girl Scout, but the best Girl Scout of them all.”