In a letter to her father in August 1911 regarding the Girl Guides organization in Britain Juliette Gordon Low proclaimed “I like girls, I like this organization and the rules and pastimes, so if you find that I get very deeply interested you must not be surprised!” Despite her family’s suspicions that her enthusiasm would wane as it had for so many other projects, Juliette lived up to her proclamation. Her interest in the Girl Guides organization spread across the Atlantic Ocean in March 1912 when Juliette Gordon Low returned to Savannah, Georgia.

Founding the Girl Scouts of the USA 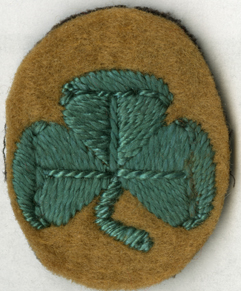 Upon returning to Savannah, Juliette made her now famous call to the future Girl Scout commissioner of Savannah Miss Nina Pape. In the call Juliette exclaimed “Come right over. I’ve got something for the girls of Savannah, and all America, and all the world, and we’re going to start it to-night.” 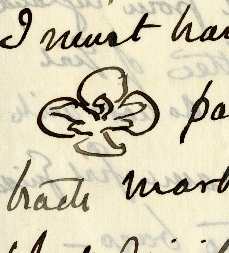 Detail from a letter fragment of 1913 shows a design which Juliette Gordon Low wants to have patented and use as a trade mark. From the Gordon Family papers, MS 318

On March 12, 1912 Juliette Gordon Low registered eighteen girls into the United States first troop of Girl Guides. After establishing the first troop in Savannah, Juliette left them in the capable hands of her cousin Miss Pape.

Girl Scouts caught on quickly in Savannah. The girls used the English Girl Guides handbook to adopt a constitution and design their own uniforms and badges. Getting girls involved in outdoor physical activities was one of the main goals of the early Girl Guides movement. A basketball league was quickly formed in Savannah.

In 1917, Juliette Gordon Low, with the help of others like Walter John Hoxie, adapted the British handbook for Girl Guides to meet the needs of the Girl Scouts of the United States. Click on the thumbnails below to see a few pages from the handbook. To view a full online digital version visit The Project Gutenberg EBook of How Girls Can Help Their Country, by Juliette Low and Agnes Baden-Powell and Robert Baden-Powell

In 1920, the Girl Scouts USA wrote and published their own handbook. Click on the thumbnails to see a selection of pages form the Georgia Historical Society’s copy of the 1920 handbook. To see the full 1920 handbook visit The Project Gutenberg EBook of Scouting For Girls, Official Handbook of the Girl Scouts, by Girl Scouts 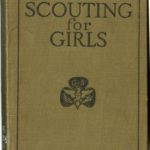 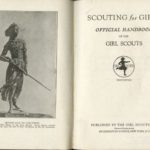 The Georgia Historical Society has a collection of Juliette Gordon Low’s personal Girl Scout badges. See if you can match the badge images to their name. The names and descriptions for the badges come from the 1917 Girl Scout handbook. See the badge descriptions from the handbook to help you make the matches. 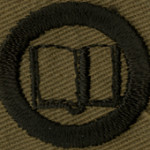 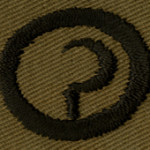 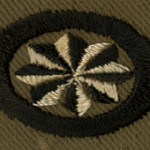 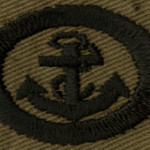 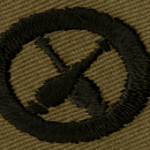 A. Civics / Citizen Badge: Tell the history and object of the Declaration of Independence; be able to name the officers of the President’s Cabinet and their portfolios.

B. Athletics: Know and be able to teach twenty popular games.

D. Boatswain: Be able to row, pole, scull, or steer a boat; land a boat and make fast; state directions by sun and stars.

E. Scribe: Write 12 news articles (preferably one a month), not to exceed 500 words each, on events that come within the observation of the Scout that are not public news, as for instance, school athletic events, entertainments of Scouts, church or school, neighborhood incidents.

Continue to WWI and the Girl Scouts