Juliette Gordon Low grew up during a time of great conflict and change in the United States. During her childhood, Low’s family struggled through the Civil War, Reconstruction, and a Yellow Fever Epidemic. Despite these struggles, she grew up in a loving family and had the privilege of a good education. As a young girl, Low loved to play outdoors and desired to help others. Later she would help thousands of girls enjoy the outdoors, serve others, and so much more as the founder of the Girl Scouts of the USA. 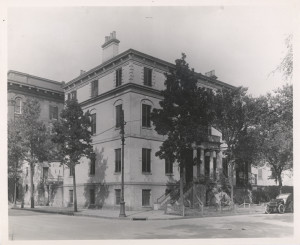 Juliette Gordon Low, often called by her nickname Daisy,  was born Juliette Magill Kinzie Gordon on October 31, 1860. Juliette spent her early years in Savannah, Georgia, where her home is now a Registered Historic Landmark under the administration of the Girl Scouts of the USA. You can visit the birthplace to learn more about how Juliette and her family lived when she was alive.

Daisy’s parents were William Washington Gordon II and Eleanor (Nelly) Kinzie Gordon. Daisy’s father William was a native of Savannah and his family played an important role in the growth of the city. Daisy’s grandfather William Washington Gordon I served in the Georgia legislature, became Mayor of Savannah, and founded the Central Rail Road and Banking Company. There is even a county in Georgia named after W.W. Gordon I. 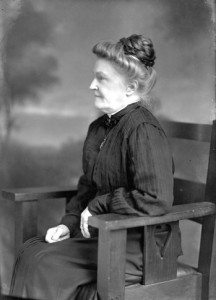 Not long after Daisy was born, the United States entered  the Civil War. Daisy had family fighting on both sides of the war. Daisy’s father William Washington Gordon II served as a lieutenant for the Confederacy while her mother’s side of the family fought for the United States. While their father was away fighting the war, Daisy, her sisters Eleanor and Alice, and their mother Nelly struggled like most did on the home front. Food was expensive and scarce and the family often lived far away from their home in Savannah either to be closer to their father or to find safety. 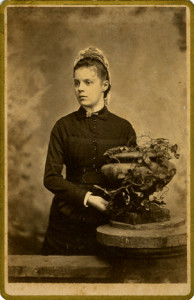 Daisy still lived a privileged life despite the financial troubles the Civil War and Reconstruction brought to her father’s business. Daisy’s mother oversaw her early education and nurtured her talents in the arts. As a child Daisy exhibited a love of the outdoors, a propensity for physical activity, and a desire to help others. All these traits would later become tenants of the Girl Scout movement.

In the book Juliette Low and the Girl Scouts edited by Anne Hyde Choate and Helen Ferris, Juliette Low writes about her childhood in a chapter titled “When I was a Girl.” In this chapter she tells about her fond memories of spending the summers on their plantation in northern Georgia where a governess taught Daisy and a few of her cousins under the walnut trees. Juliette Low also reminisces ab 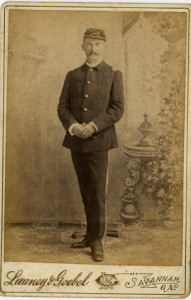 out the first organization she ever founded, “Helpful Hands.” Unfortunately the Helpful Hands club was disbanded in the summer of 1876 with the outbreak of the yellow fever epidemic in Savannah. Daisy’s father, a member of the Savannah Benevolent Society, remained in the city to care for the sick, but sent Nelly and the children away to avoid the scourge. Below you can learn more about the 1876 yellow fever in Savannah by reading primary sources from the Georgia Historical Society’s manuscript collection.

Just as Daisy had family fighting for both the North and the South in the Civil War, Daisy herself lived in both worlds. Daisy had the opportunity to visit her grandparents in Chicago on many occasions, including during the final stages of the Civil War when women and children were forced to evacuate Savannah. When she turned thirteen, Daisy’s parents sent her to a French boarding school in the North to experience life in New York City. You can learn more about Daisy’s time at Etowah and in Boarding school by reading her letters from the Georgia Historical Society’s manuscript collection.

From the Source: Daisy’s Letters

These galleries includes four letters written by Juliette Gordon Low during her time away from Savannah at boarding school. Click on the tabs to read the letters in Daisy’s handwriting. To get started deciphering the young Daisy’s handwriting, read the transcribed excerpt provided under each letter.

“Oh mama, we got the box of candy, and of my dress, and Nellies waist, and were so much obliged, for both; the idea of you saying you thought I should be reconciled, I think its perfectly lovely, it could not be prettier, I got my bible the other day, and it is lovely, the nicest birthday present you could give me, and I am going to get Lillian Gittings to write my name in it for me, because she is my best friend here, she is next to the prettiest girl in school…P S Excuse horrible writing and spelling I hope you can read it…”

Excerpt:
“My darling Mama,
Nell is studying for her Literature examination, and so I’ll have to do all the writing, and I think you will have pretty seldom as I hate to get ready to write, but after I am once started I dont mind, so dont be worried if I dont write very often. I have a tooth that has a large hole in it, it dont hurt, but it is very troublesome, shall I have it filled or not?…and mama, will you please send us some more of the little elastics for our hair, the ones you send are all up….Good bye my dear little sweet Mama, your own little, (I have not grown a bit,) Daisy.”

Excerpt:
You arrived saftly I hope, you don’t know how lonely I feel without you, but I have not cried once, and neither has Nellie, she is well now, and as bright as a button, please answer this letter soon, as I am dying to hear from you. Mama I am going to try and be very good, and practice, and study hard, so you wont be disappointed in me again after today, but today I felt as if I did not care for anything, and so I did not do my duty…P.S. Please write soon, just 10 weeks before I will see you…aint this a nice letter, not one mistake in spelling.” 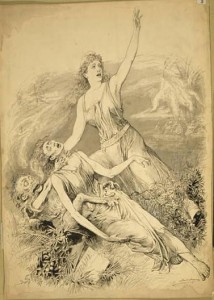 Today medical doctors and scientists know the causes, symptoms, and possible treatments for yellow fever. Yellow fever is a flavivirus transmitted to humans through the bite of an infected mosquito. Yellow fever primarily affects tropical regions of South America and Africa. It has no specific treatment other than to get plenty of rest and liquids. To prevent outbreaks of the yellow fever, like the 1876 epidemic in Savannah, residents in high-risk areas can wear insect repellent, wear proper clothing to avoid bites, and stay indoors during peak hours of mosquito activity. A yellow fever vaccine is also available; however, it must be re-administered every ten years.

The medical community did not officially accept the mosquito as the transmitter of the disease until 1900 when Walter Reed and the U.S. Army yellow fever Commission gave the official report. A Georgian named Dr. 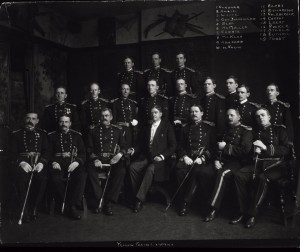 Joseph Hill White played an important role in the scientific study of the disease by experimenting with mosquito eradication to prevent yellow fever. It was Dr. White’s success at controlling an outbreak of yellow fever on an army base in Virginia that convinced Walter Reed to publicly claim the mosquito bite as the cause of yellow fever infection.

Juliette Gordon Low’s mother Nelly Kenzie Gordon wrote about her experiences during the 1876 Yellow Fever epidemic. William Washington Gordon II, Nelly’s husband, stayed in Savannah during the epidemic to fulfill his duties as a member of the Savannah Benevolent Society. Nelly wanted to be close to her husband and refused to retreat to Etowah with her children. As a compromise, Nelly agreed to stay outside the city in Guyton. Her 12-page remembrances include graphic descriptions of yellow fever symptoms.

Excerpt:
“The situation was discussed next morning at the breakfast table. The children were much excited over it. All the children were willing to stay in Savannah, except Daisy. — She wanted to leave at once! I reproached her “Wouldn’t you want to stay and die with your family?” I asked. “I’d like to live anywhere with my family” replied Daisy, “but I don’t want to die with my family here or anywhere else” and from that point of view nothing could move her.”

Report 1:  “A Monograph on the Yellow Fever of 1876 in Savannah, Georgia,” by Dr. Louis A. Falligant. Savannah: Morning News Print, 1888. From the collection of University of Michigan. Accessed on the Internet Archive.

Report 2: “A Study of the Yellow Fever Epidemic of 1876, as it Affected the State of Georgia.” By Ely McClellan, M.D. Majr and Surgeon United States Army . In Public Health Reports and Papers Volume IV, edited by the American Public Health Association. Boston: Houghton, Osgood and Company, 1880, 249-285. Accessed on the Internet Archive.

William Wright worked as a chairman for the Department of Health and Cemetery in Savannah. There are records of deaths from the yellow fever epidemic in 1876 included in this ledger. These records list the names of the people who died daily because of the disease and notes the person’s age, race, and cemetery in which they were buried. 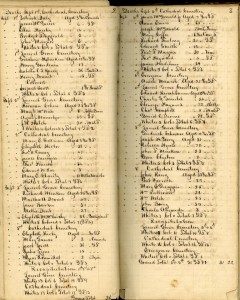 On October 11, 1876, William Washington Gordon II wrote his wife a letter detailing how the his property, real and personal, should be handled in case he did  not survive the yellow fever epidemic. Below is the typed copy with a handwritten addendum. 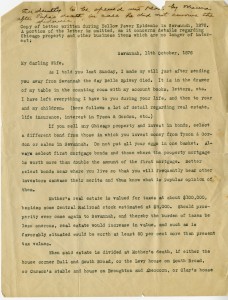 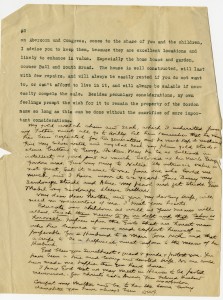 Typed copy with handwritten addendum of a letter written by W.W. Gordon II to his wife, October 11, 1876. From the Gordon Family Papers, MS 318.

Below are two examples of letters written by Gordon family members during the 1876 yellow fever epidemic. The first was written by Juliette Gordon Low to her mother. The second letter was written by Nelly Gordon to her daughter Alice. 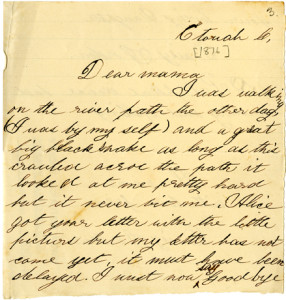 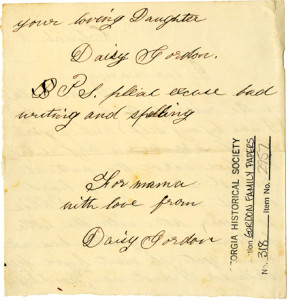