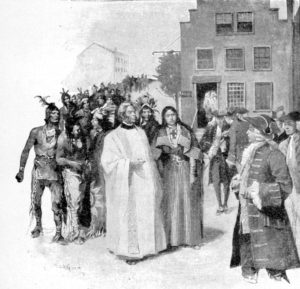 While most won’t recognize the Creek name Coosaponakeesa, the name Mary Musgrove (ca. 1700 – ca. 1763) may spark recognition.  The daughter of a Creek mother and English father, Mary Musgrove proved instrumental in maintaining peace and fair trade between the Creek nation and the new Georgia colony.  She married John Musgrove in 1717 and quickly established a trading post.  She attracted the attention of General James Oglethorpe and served as his main interpreter from 1733 to 1743.  Musgrove married three times, all the while increasing her business acumen and sharpening her diplomatic skills.  The marriage to her last husband, a Christian missionary named Thomas Bosomworth,elevated Musgrove to a social status heretofore unreached by someone of Creek descent.

Musgrove is also known for her battle to keep Ossabaw Island, Sapelo Island, and St. Catherine’s island, granted to Musgrove and Bosomworth by the Lower Creek chief Malatchi.  The British Crown insisted that a nation could only grant land to another nation, not an individual.  After a protracted legal battle, Musgrove compromised by relinquishing all land holdings except St. Catherine’s Island, where she died some years after 1763.

From the GHS Collection: