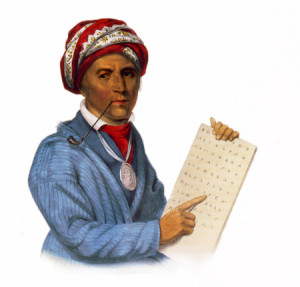 Henry Inman’s Lithograph of Charles Byrd King’s original portrait of Sequoyah in The Indian Tribes of North America by McKenney and Hall. From the Georgia Historical Society Rare Collection.

Sequoyah, credited as the creator of the Cherokee syllabary, was born circa 1760  in a small village in present-day East Tennessee, approximately 8 miles from Echota, the old capital of the Cherokee Nation.  He was the son of a Cherokee mother, Wu-te-he of the Red Paint Clan, and a white father—possibly Nathaniel Gist, a commissioned officer in the Continental army and emissary of George Washington.  Throughout his life, Sequoyah remained faithful to the traditions of the Cherokee people, never adopting white dress, religion, or other customs. He spoke Cherokee exclusively.

In the 1790s, Sequoyah resettled in what is now Arkansas when tribal land along the Tennessee River was ceded to whites.  He worked for many years as a trader and later became a silversmith as well as a blacksmith. During the War of 1812, Sequoyah and other Cherokees enlisted on the side of the United States under General Andrew Jackson to fight British troops and the Creek Indians.  In 1815, Sequoyah married Sally Waters, a Cherokee woman of the Bird Clan, and began his family.

Sequoyah, intrigued by the whites’ ability to communicate through writing, worked for twelve years to create a system of approximately eighty-six characters that represented syllables in spoken Cherokee. The first to read and write in Cherokee was Sequoyah’s daughter, A-Yo-Ka. Once the Cherokee officially adopted his syllabary, a large part of the Nation achieved literacy in a very short time. Sequoyah is credited by the Cherokee Nation as having gifted them with the ability to communicate across long distances and throughout the ages by preserving the tribe’s history, culture, and spiritual practices through the written word. 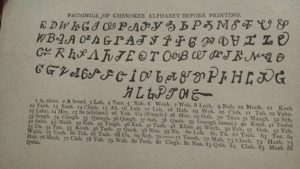 Facsimile of the Cherokee Alphabet before Printing in Se-quo-yah, the American Cadmus and modern Moses…by Geo. E. Foster. From the Georgia Historical Society Rare Collection.

Following the adoption of his syllabary by the Cherokee, Sequoyah continued to work for the benefit of his people, traveling to Washington, D.C.  to help negotiate treaties and aid displaced Cherokees.  Dedicated to uniting the scattered Cherokee Nation, he died around 1840 traveling in Texas and Mexico attempting to locate communities of Cherokee believed to be living in that area.  His burial site is unknown.

From 1828 to 1834, the Cherokee syllabary was used to print articles in the Cherokee Phoenix, a newspaper published in New Echota, Georgia (capital of the eastern Cherokee from 1825 until 1832).  The publication of the newspaper along with the organized government of the Cherokee Nation (which included a tribal council and supreme court) infuriated state officials.  Tensions were heightened when gold was discovered in Cherokee territory in North Georgia.  Gold speculators began trespassing on tribal lands, and increasing pressure was placed on the Georgia government to remove the Cherokee.

Finally in 1838, after years of negotiations and work by tribal leaders including Sequoyah to retain their land, the Cherokee were forcibly removed from Georgia. The long journey to reserved lands in Oklahoma, during which an estimated 4,000 people died from hunger, exposure, and disease is remembered by the Cherokee and other removed tribes as the “trail where they cried” or the “Trail of Tears.”

When the Cherokee were removed, their buildings and printing press at New Echota were destroyed. Excavations in the 1950s led to a partial reconstruction of the town.  Today, the New Echota State Historic Site near Calhoun includes several replicas of Cherokee town buildings as well as a working printing press.