Cherokee Before the American Revolution

Cherokee Before the American Revolution

The Cherokee Nation has roots in this country that extend thousands of years into the past.  However, as with most Native tribes, what we may have learned in school about their origins, or even the name or the names with which they refer to themselves, may be very different from either the history or even the name(s) they would have claimed themselves.  According to the Cherokee Nation, the Cherokee refer to themselves as “Aniyvwiya” meaning the “Real People” or the “Anigaduwagi” or the Kituwah people.  Other Native American tribes such as the Choctaw, Chickasaw, Huron, Catawba and Iroquois describe them differently:  Choctaw and Chickasaw knew them as Chilukki, the dog people; Huron knew them as Entarironnen, the mountain people; Catawba referred to them as Matera or Manteran, meaning coming out of the ground; and Iroquois called them Oyatageroneon, Oyaudah, or Uwatayoronon, the cave people. 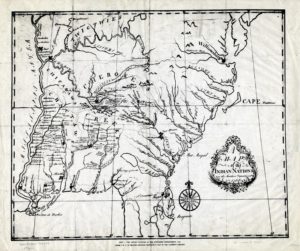 A Map of the Indian Nations in the Southern Department, 1766. From the Georgia Historical Society Map Collection, MS1361-MP.

When European settlers arrived, they too had their own description of the Cherokee people. The Spanish referred to them as Chalaque.  The French description is similar to the Choctaw and Chickasaw descriptions, referring to them as Nation du Chien (Nation of dogs). The term “Cherokee” is an English word that is translated Tsalagi or Anitsalagi in the Cherokee language.

The “Real People” first encountered the “New Comers” in the 1540 Spanish Expedition of Hernando de Soto. Following that expedition, the Cherokee began to experience significant depopulation due largely to European-introduced diseases, to which the Native Americans had no immunity. In fact, by the time of Sequoyah’s birth in the 1760s, the population of the Cherokee had decreased dramatically from approximately 35,000 at the end of the seventeenth century, to around 7,000. Throughout Native America, disease was the most deadly weapon of the Europeans.

In 1673, English settlers came to Echota, the East Tennessee capital of the Cherokee Nation, to establish trade relations. European goods such as brass kettles, textiles, scissors and knives, guns and ammunition, metal hatchets and hoes, and trinkets were exchanged for native deerskins, beeswax, and river cane baskets.  Deerskins were in great demand in England to make leather goods and products.  Gradually, trade negotiations and intermarriage between tribe members and the settlers  permitted the English to establish themselves in Cherokee villages.

Peace treaties between the English and Cherokee were developed early as well.  In 1730, the Cherokee made an alliance with the English by pledging their allegiance to the British Crown, King George the Second, and promising to trade with the English only. Other European settlers were making alliances with Native American tribes as well, so the English needed special protection from their greatest rival, the French.

Other negotiations sought Cherokee land. By that time, Cherokee territory had been firmly established in the Appalachian region of the southeastern United States, encompassing terrain that included parts of modern North and South Carolina, Tennessee, Kentucky, Alabama, and Georgia. However, through negotiations in nearly ten different treaties between 1721 and 1777 large sections of land were given up by the Cherokee, dramatically reducing their territorial holdings.

Continue to Cherokees After the American Revolution