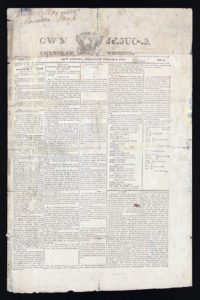 Cherokee Phoenix from March 1828 including the Cherokee Constitution. Courtesy of the Library of Congress.

By the end of the eighteenth century, the Cherokee people living east of the Mississippi formed a centralized government.  Affairs were no longer executed at the clan level, and they began to concentrate on an agenda that protected their homeland.  For example, in the 1790s, the National Council created the Light Horse Guard, a Cherokee police force.  In 1805, the National Council also ratified the Treaty of Tellico Block House, which authorized the construction of a road that stretched from the Chattahoochee River to the Tennessee River.  Many Cherokee perceived the efforts of their National Council as a positive force consolidating their people and their homeland.

Under the leadership of men like John Ross, Major Ridge, his son John Ridge, and Elias Boudinot, the Cherokee were encouraged to assimilate in order to prove to the United States they were “civilized” enough to remain in their homeland.

Approximately one third of the Cherokee people moved to Indian Territory west of the Mississippi River around the year 1817. The group, which included Sequoyah, became known as the Old Settlers because they moved to Indian Territory before the Trail of Tears. They signed a treaty with the United States that traded land in the southeastern United States for land in modern-day Arkansas. In 1828, Sequoyah went with a delegation of Old Settlers to Washington, D.C., to sign a new treaty exchanging land in Arkansas for land in modern-day Oklahoma (aka Indian Territory). You can still visit Sequoyah’s cabin near Sallisaw, Oklahoma. 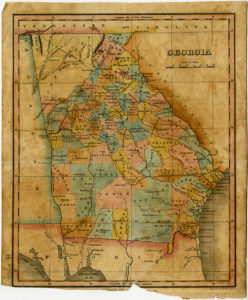 In 1824, the Cherokee capital was moved to the northwest Georgia town of New Echota.  The old capital at Echota, Tennessee had suffered dramatically from war and raids.  New Echota was defined by signs of the modern, civilized, and assimilated society of the Cherokee.  The new capital had a two-story council house with glass windows and brick chimneys, and it  included wide streets with large, frame houses and signs of trade and commerce.  Outside of town were plantations, maintained by enslaved labor, owned by Cherokee leaders – many of whom were educated in northeastern boarding schools.

By 1827, a new constitution (similar to the constitution of the United States) was drafted, emphasizing the sovereignty of the Cherokee Nation.  The Principal Chief’s position was strengthened and the constitution proclaimed “the boundaries of this Nation, embracing the lands solemnly guaranteed and reserved forever to the Cherokee Nation by the Treaties concluded with the United States.”  Shortly after its adoption, John Ross was elected Principal Chief in the nation’s first elections.  Major Ridge served as his counselor for the next seven years.

Elias Boudinot and the Cherokee Phoenix

Elias Boudinot (born with Cherokee names Gallegina and Buck Oowatie) was the nephew of Major Ridge and, like his uncle, a product of the northeastern boarding schools. Boudinot was the first editor of the Cherokee Phoenix, the first Native American newspaper in United States history.  Published at New Echota, The Cherokee Phoenix became the major source for delivering Cherokee news, ideas, grievances, and interests to the American public. It was printed in two columns, one in English, and the other in Cherokee.

Worcester, a missionary affiliated with the American Board of Commissioners for Foreign Missions (ABCFM), arrived at Brainerd, Tennessee mission around the same time the Cherokee government was planning to put Sequoyah’s syllabary to use in print media. Worcester moved to New Echota when the Cherokee established the new capital. Taking the syllabary from written to print form required casting the characters in type. Some historians have argued that Samuel Worcester adapted Sequoyah’s syllabary from script to print. Recent scholars use documentary evidence to argue that Sequoyah and members of the Cherokee National Council designed the print types themselves, and only relied on Worcester to help coordinate ordering the types and printing press from Boston.

The Missionary Herald published news of the printing press at New Echota and the plans for a newspaper in December 1827:

“It was mentioned in the Missionary Herald for July, that a fount of types had been ordered by the Cherokee government…These have now been completed; and, together with a fount of English types, and an iron press, of an improved construction, and the entire furniture for a printing office, were forwarded about the middle of last month. The press will be employed in printing the New Testament and other portions of the Bible, and school-books in the Cherokee language, and such other books in Cherokee or English…A Prospectus has also been issued for a newspaper, entitled the Cherokee Phoenix, to be printed partly in Cherokee and partly in English…All this has been done by order of the Cherokee government, and at their expense.

Among the Cherokees, then, we are to see the first printing press ever owned and employed by any nation of the Aborigines of this continent; the first effort at writing and printing in characters of their own; the first newspaper, and the first book printed among themselves; the first editor; and, the first well organized system for securing a general diffusion of knowledge among the people.”

Elias Boudinot lost his job as editor because of his growing support for voluntary Cherokee removal. Anti-removal advocate Elijah Hicks took over until May 1834 when the printing press at New Echota published its last issue. The next year, the Georgia Guard confiscated the printing press and several Cherokee signed the controversial New Echota Treaty without permission from the Cherokee government. One of the singers was Elias Boudinot.

Good, But Not Good Enough

However, even this “progress”—the relocation of many Cherokee to the West, the establishment of a modern capital city in the East, a new constitution, and the first Native American newspaper—did not end the pressure put on the Cherokee to move west onto designated Indian territory.  In a federal document, the Compact of 1802, Georgians were promised the removal of all Cherokee claims in Georgia.  Citing this promise, Georgia’s insistence that the United States government forcibly remove the Cherokee became more intense.  The discovery of gold in Cherokee territory brought these tensions to a head.  Finally, in May 1830, President Jackson convinced Congress to pass his Indian Removal Act, which called for the removal of all eastern Native tribes to territory west of the Mississippi.

Four of the Five Civilized Tribes(Chickasaw, Choctaw, Creek, and Seminole) signed removal treaties in 1832.  The Cherokees rejected the demands of President Jackson and took their case to the Supreme Court.  Several prominent white lawyers, including former attorney general William Wirt, helped Chief John Ross fight for his people in the Cherokee Nation v. Georgia case in 1831.  Chief John Ross and his lawyers argued that the constitution of the Cherokee Nation proclaims their sovereignty as a nation; therefore, Georgia has no authority to confiscate their land.

Chief Justice John Marshall said to the court: “an Indian tribe or nation within the United States is not a foreign state in the sense of the Constitution, and cannot maintain an action in the Courts of the United States.”  However, Marshall also recognized the Cherokee Nation as a, “distinct political society, separated from others, capable of managing its own affairs and governing itself.”  This last statement provided some Cherokee leaders with a measure of hope that all was not lost in the fight to maintain their lands. 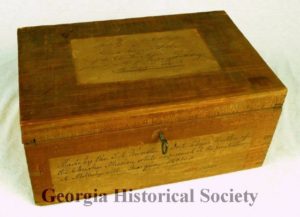 Wooden box made by Rev. S. A. Worchester and Dr. Elezier Butler of the Cherokee Mission while in prison in Milledgeville. Courtesy of Georgia Historical Society Collection A-1361-250 ab.

Shortly following this case, Samuel Austin Worcester, a missionary and advocate for Native American rights, took a stand by refusing to pledge his allegiance to the State of Georgia in defiance of a law passed in 1831. The law required all whites working within Cherokee lands (excepting those who had intermarried with the Cherokee and U.S. agents working with the Cherokee) to take an oath of allegiance to Georgia and receive a special permit from the Governor to continue their work.  All those who defied this law were to be punished with a sentence of not less than four years hard labor.  Several American Board missionaries, including Samuel Worcester, refused to either leave Georgia or take the oath.  He was arrested and his case, Worcester v. Georgia appeared before the U.S. Supreme Court, gaining much publicity.  His lawyers sought to prove that the State of Georgia had no authority over Worcester and, therefore, the State had no claim against the Cherokee.

Worcester actually won his case and the Supreme Court declared that the state laws of Georgia had no authority in Cherokee territory.  Worcester’s case brought confidence to many in the Cherokee Nation.  Others like Major Ridge, Boudinot, and John Ridge were pessimistic—and with good reason.  Samuel Worcester was released from prison a year later, and Georgians continued to occupy and distribute Cherokee land.

Continue to The Trail of Tears and Life in the West