Sequoyah and the Cherokee Syllabary

Sequoyah and the Cherokee Syllabary 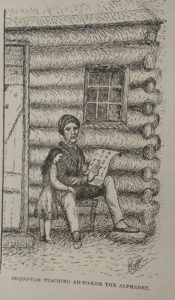 Around 1809, nine years after his mother’s death, Sequoyah began to notice and to ponder the communications of white settlers.  He realized that they were able to transmit thoughts over great distances by writing down their words and ideas.  In discussions with other Cherokees on this subject, he noted that many disapproved of the idea of writing down one’s thoughts.  Oral communication had always been the tradition among the Cherokee, and they perceived the idea of written language as witchcraft.  Despite his friends’ skepticism, he grew more interested in the idea and began working on a Cherokee writing system.

However, his work was postponed by the War of 1812.  On October 7, 1813, he, like many other Cherokee, enlisted with the U.S. Army, and shortly after, fought in the battle of Tallaschatche.  On March 27, 1814, he fought with Andrew Jackson in Battle of Horseshoe Bend.  He was discharged in April 1814.   Life with the U.S. Army provided Sequoyah more opportunities to see soldiers’ system of writing in action and made him even more determined to develop such a method for his own people.

In 1815, he married Sally Waters, daughter of Robert and Lydia Otterlifter of the Bird clan.  Together, Sequoyah and Sally had a little girl name Ayoka (other spellings include Ahyokeh).  Sequoyah continued his writing project, teaching his daughter the symbols and sounds.  He eventually created 86 different characters, inspired by Roman and Greek letters and his own inventiveness.

Initially, many Cherokees disapproved of the writing system.  To help demonstrate the effectiveness of the written language, Sequoyah often used Ayoka to show that the ideas of one person could be written down and transmitted (with no other means of communication) to another.

By 1825 the Cherokee Nation had adopted Sequoyah’s syllabary. Once adopted the writing system spread rapidly, leading to an exceptionally high literacy rate among the Cherokee in a very short period.

The Cherokee writing system was crucial in preserving the Cherokee history, culture, and spiritual beliefs. The Cherokee Nation describes Sequoyah’s contributions as follows:

“He accomplished a feat, which no other person in history has done single-handedly…he brought our people literacy and a gift of communicating through long distances and ages. This one person brought to his people this great gift without hired educators, no books and no cost.”

Continue to Cherokee Before the American Revolution