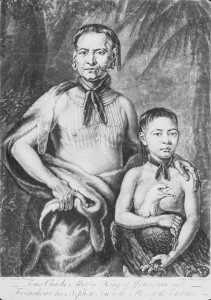 While little is known of his early life, scholars believe Tomochichi was born ca. 1644. It is also believed that he was a Creek with ties to the Creek Confederacy and to the Yamasee tribes in the geographic region that today makes up the state of Georgia. Around the year 1728 Tomochichi formed his own tribe, the Yamacraw, consisting of about 200 Lower Creeks and Yamasees.  The Native Americans who made up the Yamacraw tribe broke away from their respective tribes following disagreements over the future of relations with Europeans settlers. The Yamacraw settled on the bluffs of the Savannah River, an area in close proximity to the final resting place of their ancestors and to English traders from South Carolina.

On February 12, 1733, General James Oglethorpe and the first 114 colonists from Great Britain landed on Yamacraw Bluff and founded the Colony of Georgia. Given his previous experience with colonists (most likely from South Carolina), Tomochichi was not afraid of the new Georgia colonists but chose to use caution in his interactions with them. About a month after the colonists arrived, Tomochichi came to visit Oglethorpe in Savannah. Through the efforts of interpreter Mary Musgrove, he and Oglethorpe drafted a treaty allowing Oglethorpe to establish the City of Savannah and Tomochichi to benefit from trade with the colonists. 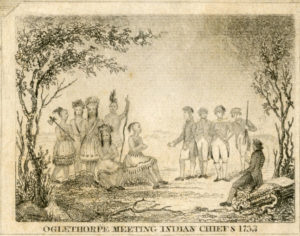 The Gentleman’s Magazine in London published Oglethorpe’s account of the peace treaty, asserting that the Yamacraw “freely gave up their Rights to all the land they did not use themselves…” Once an agreement was reached, Oglethorpe and Tomochichi exchanged gifts. Tomochichi gave Oglethorpe buffalo skins “on which an eagle head and feathers was painted.” In return, Oglethorpe presented the chief with European-styled clothing, cloth, gun powder, tobacco, and pipes.

Tomochichi and the Yamacraw proved to be invaluable resources during the early years of the colony. Tomochichi helped the colonists lay out roads, including the first one from Savannah to Darien (or New Inverness) to the south. He also aided Oglethorpe as a mediator between the Yamacraw and surrounding tribes and the British colonists. 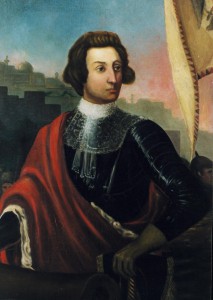 In addition to helping Oglethorpe establish Savannah and the Colony of Georgia, the Yamacraw chieftain also accompanied Oglethorpe to Great Britain in 1734, along with members of his family and a delegation of Yamacraw tribesman. Tomochichi was a capable mediator for his people as he attended meetings with British dignitaries, including King George II and Queen Caroline, the Archbishop of Canterbury, Parliament, and the Georgia Trustees. The chief presented the King and the Georgia Trustees with the requests of the Yamacraw for education and fair trade. Upon returning to Georgia, Tomochichi met with Lower Creek Chieftains and convinced them to ally themselves with the British.

In 1736, Tomochichi oversaw the establishment of a short-lived school for the Yamacraw in Irene (on property owned by the present-day Georgia Ports Authority in Savannah) with the help of Benjamin Ingham, a friend of John and Charles Wesley. That same year, Tomochichi also continued to work with Oglethorpe, mediating interactions with the Spanish and participating in an expedition to determine the southern boundary of Georgia. Throughout the colony’s early years, Tomochichi and Oglethorpe often worked together and asked advice of one another. It was the goal of both men to maintain peace between the British colonists and the surrounding Native American tribes.

In August 1739, Oglethorpe traveled to meet the leaders of the Creek Nation at Coweta (in western Georgia) to reinforce the existing relationships, which primarily revolved around land and boundaries.  Tomochichi was unable to accompany Oglethorpe on this diplomatic trip due to a severe illness. On October 5, 1739, the chieftain died. William Stephens, Trustee secretary, wrote that Tomochichi was “upwards of ninety years old” at the time of his death, although some modern historians believe he was younger than ninety.

When Oglethorpe returned from his trip to Coweta, he learned of Tomochichi’s death. Because of the chieftain’s help in establishing the Colony of Georgia, Oglethorpe held a military funeral to honor Tomochichi and acted as a pallbearer at the funeral. Tomochichi was buried in what is now Wright Square (formerly Percival Square) in Savannah.