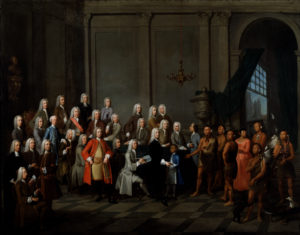 Audience Given by the Trustees of Georgia to a Delegation of Creek Indians. by William Verelst, gift of Henry Francis du Pont, 1956. Courtesy of the Winterthur Museum.

In 1734, General Oglethorpe made plans to return to London to report to the Georgia Trustees about the young colony’s status. Tomochichi, his wife Senauki, nephew Toonahowi (sometimes spelled Toahahwi), and a delegation from the Yamacraw tribe accompanied Oglethorpe on his voyage to Great Britain. The chief sought assurances that his people would receive education and fair-trade policies with the British.

Continue to Tomochichi’s Death and Burial