On October 5, 1739, Tomochichi died after suffering from a serious illness. Oglethorpe learned of Tomochichi’s death when he returned from his diplomatic trip to the Lower Creek town of Coweta. Oglethorpe held a military funeral to honor Tomochichi because of the chief’s help in establishing the Colony of Georgia. The Yamacraw chieftain had expressed a desire to be buried in the town he helped to create. On Oglethorpe’s orders, Tomochichi was buried in Wright Square (formerly Percival Square) in Savannah, and his grave was marked with a pyramid of stones.

Today, a monument to William Washington Gordon stands in the center of Wright Square. So what happened to Tomochichi’s grave and the pyramid of stones Ogelthorpe ordered erected in his honor?

Dr. Robin B. Williams, Chairman of the Architectural History Department at the Savannah College of Art and Design, compared historical maps and images of Savannah to demonstrate the changes in Tomochici’s burial place. In William Gerard De Brahm’s Plan of Savannah, 1757 map, Tomochichi’s grave is depicted in Wright Square. At the time of Tomochichi’s death, Oglethorpe ordered a monument to be placed to honor his friend and ally. In reports, the monument was translated as a pyramid of stone. However, by the 1830s, the pyramid of stones was no longer in Wright Square. In his famous painting, View of Savannah from 1837, Joseph Louis Firmin Cerveau depicts the view of Savannah from the City Exchange on Bay Street looking down on Bull Street. In the painting, there is no monument or pyramid of stones in Wright Square. It is unknown what happened to the monument between the creation of these two sources. Perhaps the memory of Tomochichi’s burial was simply forgotten by the citizens of Savannah, or perhaps the memorial was purposefully removed due to changing relationships with Native Americans, especially after the American Revolution. 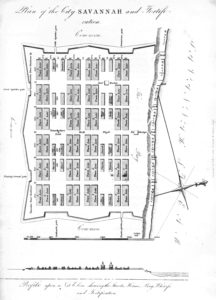 William Gerard De Brahm. (From History of the Province of Georgia. With Maps of Original Surveys [1849].) 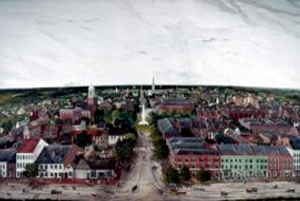 In the late 1800s, Tomochichi came back into the spotlight. In his biography of the chieftain, Historical Sketch of Tomo-Chi-Chi, Mico of the Yamacraw (1868), Charles C. Jones, Jr. laments that Tomochichi had not been remembered by the public. The biography caused the public to once again recall the role Tomochichi played in establishing the young Colony of Georgia. A few years later a series of mounds appeared in some of Savannah’s Squares, including Wright Square. However, these mounds were not meant as a monument to Tomochichi or anyone else. It is believed that the city placed the decorative mounds in the center of the squares to prevent streetcar tracks from being laid through the squares on Bull Street.

In 1883, the mound at the center of Wright Square was removed, and the William Washington Gordon monument was erected by the Central of Georgia Railroad. Resurgence of interest in Tomochichi caused some resistance to the new monument. In a letter to the editor, one gentleman referenced the biography of Tomochichi by Charles C. Jones, Jr., stating that Tomochichi was buried in Wright Square. In his opinion, the City of Savannah should instead erect memorials to General Oglethorpe and Tomochichi in Wright Square. 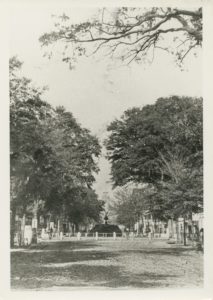 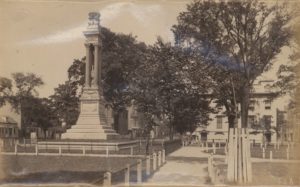 Gordon’s daughter-in-law, Nellie Kinzie Gordon, later advocated for a monument to Tomochichi to be erected in Wright Square. On April 21, 1899, the Tomochichi Monument, a granite boulder, was dedicated by the Georgia Society of the Colonial Dames of America. The boulder can still be seen in the southeast corner of Wright Square in Savannah, along with a copper plaque commemorating Tomochichi. 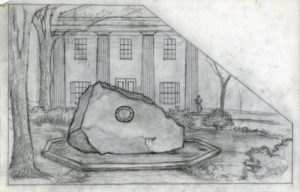 Drawing of the Tomochichi Monument. From the Augusta Oelschig drawings and Other Materials Collection, MS 1383.