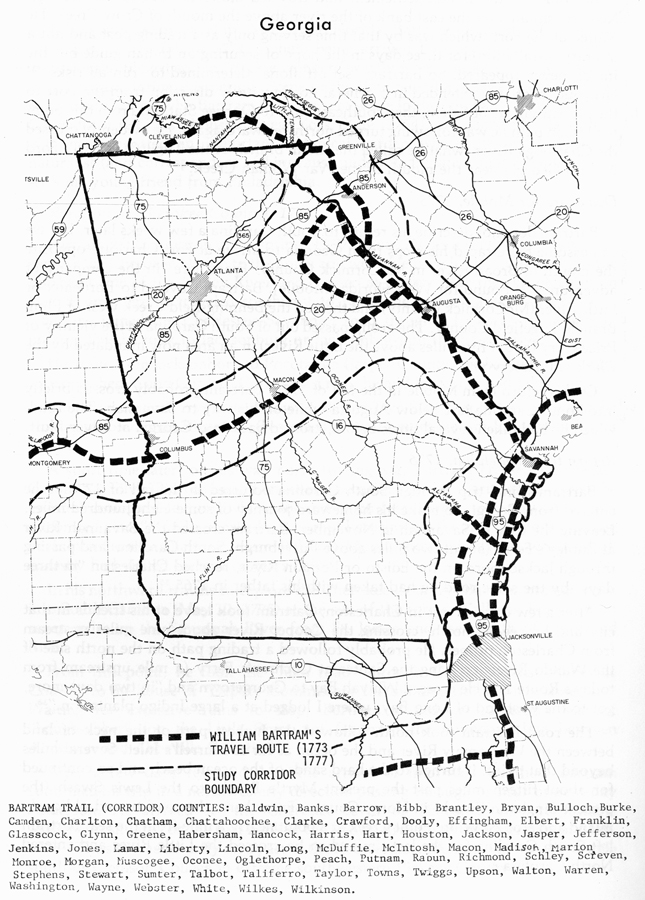 William Bartram was 35 years old in 1773 when he began his “great adventure.”  During his three-and-a-half year trip, Bartram traveled over 2,400 miles.  He traveled through eight modern-day southern states (Alabama, Georgia, Florida, Louisiana, Mississippi, North and South Carolina, and Tennessee), but most of his time was spent in the backcountry, mountains, and coastal areas of Georgia.  Bartram did not take a direct route through Georgia.  Instead he seems to have taken a more leisurely journey back and forth throughout the state, using Augusta and Savannah as places to rest and prepare for his next adventure.

Bartram traveled by foot, on horseback, and by canoe – sometimes alone and sometimes with groups.  Along the way, he described, cataloged, and took specimens from the abundant and varied plant and wildlife.  During his adventures, Bartram was able to describe and catalog over 200 species of birds alone!  He cataloged, along with his father on an earlier trip, over 350 species of flora and fauna, 150 of which were completely new to science.

Bartram’s first destination in the Southeast was Charleston, South Carolina.  From there, he rode a schooner to Savannah in March 1773. Bartram primarily traveled in the southeastern part of Georgia during the spring of that year.  The Georgia assembly was meeting in the colonial capital of Savannah when Bartram first arrived in the port city after leaving Charleston.  He made friends with some of the assembly delegates and throughout his travels would often stay with these men and their families whenever possible.  Bartram became particularly good friends with Lachlan McIntosh and his son, John McIntosh.

After a few days of rest in Savannah, Bartram traveled throughout central and coastal Georgia, noting in his writings the vast differences between the farm and plantation land and the “high pine forests” for which Georgia is so famous.

Bartram and his friend John McIntosh were invited to observe a meeting which was intended to redefine the boundaries between Creeks, Cherokees, and the Georgia colony along the northern colonial border.  While waiting for the meeting to begin in May 1773, Bartram “chose to employ [his] time in searching the country round about.” As a Quaker, he was very interested in visiting Wrightsborough “a new [Quaker] settlement about 30 miles from Augusta.” At the time Bartram visited the town, it consisted of “about 20 houses.” 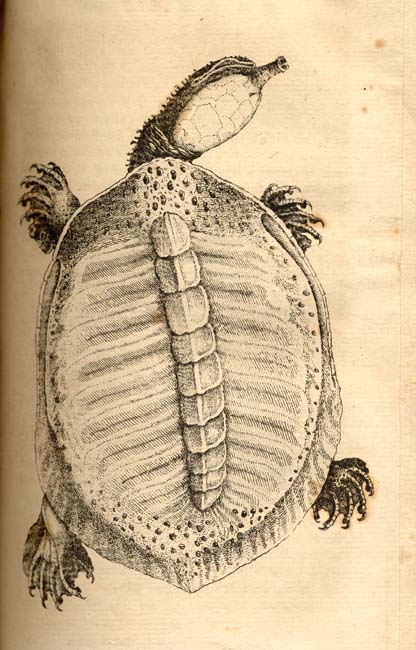 After the meeting about the new Indian settlement, Bartram was invited to join a large group of men consisting of “surveyors, astronomers, artisans, chain-carriers, markers, guides, and hunters, besides a very respectable number of gentlemen…in order to speculate in the lands.”   This party of men, led by Colonel Barnet, followed an old Cherokee trail to the “Cherokee Corner” on what we now know as the boundary between Clarke and Oglethorpe counties about nine miles southeast of Athens, Georgia.

We think that Bartram, along with Colonel Barnet’s party, passed through Clarke, Madison, Franklin, and Hart Counties during this surveying expedition.  The group then went east to the Savannah River and ended up at the mouth of the Tugaloo River. By the middle of July 1773, Bartram had made his way back to Savannah.
Bartram did not spend much time describing his journeys during the late summer and fall of 1773.  In his famous book, Travels through North and South Carolina, Georgia, East and West Florida, the Cherokee Country, the Extensive Territories of the Muscogulges or Creek Confederacy, and the Country of the Choctaws, published in 1791, he wrote that between July 1773 and March 1774 he spent his time “in botanical excursions to the low countries between [South] Carolina and East Florida.  We know that during this time, he traveled in Jasper County, South Carolina, then back to Savannah via a ferry (called Three Sisters) on the Savannah River.  He writes that he traveled a familiar road many times, a road he and his father first traveled in 1765.

Even though we have learned so much about Georgia through Bartram’s descriptions of the land, animals, and plants, Bartram was not very precise in tracking his travels!  In fact we now know that some of the dates published in his 1791 Travels are incorrect.  For example, Travels gives the time of Bartram’s excursion into Cherokee territory as 1776, when he was actually there in 1775. 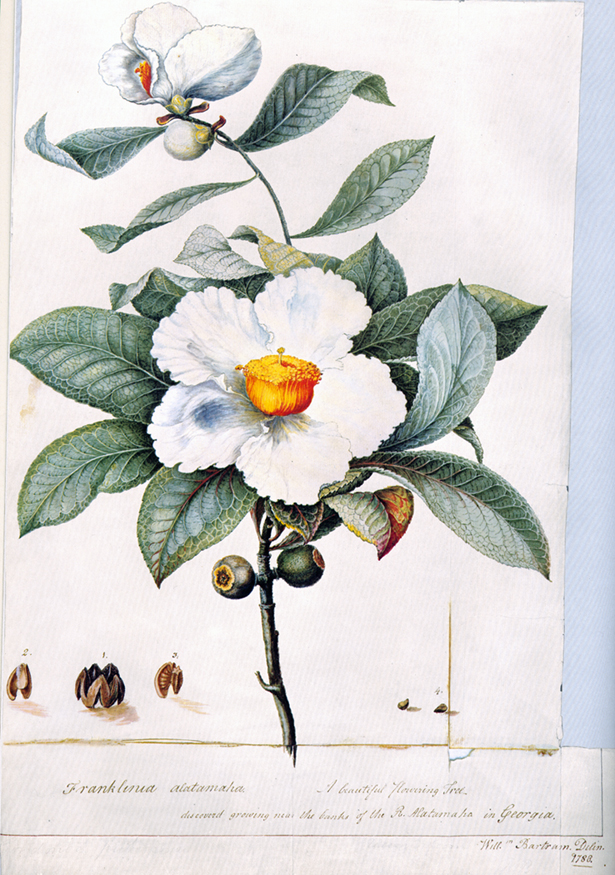 Of special interest to Bartram were the different Native American Indian nations in the area.  At this time, there were many Cherokees in the southern Appalachians.   Bartram even calls this area, the “Cherokee Mountains.”  He was generally well liked by the native peoples he encountered during his travels. As a Quaker, Bartram wrote about the inherent goodness and equality of all people and that man and nature have a special interconnection.

It is exciting to know that we can visit the same places today that Bartram traveled over 230 years ago.  Much of Bartram’s trail is now covered with modern roads and bridges or is privately owned, but there are historical markers all over Georgia noting the importance of his work.  Today, you can hike and camp along 37 miles of Bartram’s trail.

There are several species of plants that are now extinct except for the specimens that Bartram and his father cataloged and grew.  It is easy to forget that we live in such a rich and diverse ecosystem here in Georgia.  William Bartram reminds us of the beauty of Georgia even to this day.

Continue to Bartram and Nature